The mineral was quoted yesterday at US $ 3.82 a pound.

The price of the country’s main export continues to rise. Yesterday it experienced a new day of rise in its price on the London Metal Exchange, which took it to highs of almost nine years.

Furthermore, there is a certain consensus in the market that this streak will continue in the short term, so it would be a matter of time to overcome the barrier of US $ 4.

“If there is no negative news from China or the vaccine, the price will continue to rise. Our expectation is that within this year and the next it will reach US5 4, but the exact moment will depend on how the events unfold, which is very difficult to foresee ”, comments the executive director of Plusmining, Juan Carlos Guajardo. He points out that the strength of the moment copper is going through is such that yesterday it raised its price despite the fact that the markets of the United States and China were closed.

The director of studies at Vantaz, Daniela Desormeaux, agrees that the date on which the US $ 4 barrier will be overcome cannot be foreseen, but she is optimistic that the current trend will spread, even pointing out that it is unlikely that corrections are seen in the short term.

“When you talk about a correction, it’s a return to balance. This occurs when prices rise due to factors that go beyond their fundamentals and the market becomes balanced again. In this case, a correction could be observed in the long term, when supply adjusts again, but we are seeing a lag in productive capacity, and demand that has continued to grow, with a recovery with better prospects and a supply that it is left behind, which has driven the price up ”, says Desormeaux.

However, both experts agree that although the scenario is positive, the main risks will come from eventual impacts resulting from the pandemic, with countries that are even facing a third wave of infections.

Although Chile is recognized as the world’s leading copper producer, in the midst of the pandemic, said leadership was increased, thanks to the operational continuity that allowed production to close only 1% below 2019.

On the contrary, Peru, the country’s main competitor, was forced to stop operations, which, according to figures revealed by the Ministry of Energy and Mines (Minem) of that country, caused production in 2020 to plummet by 12% .

The most critical months in the Andean country were April and May, when production fell by more than 33% compared to the same month of the previous year, a figure that gradually diminished, reaching the last month of the year similar figures to a normal year.

In this way, according to Cochilco and Minem data, Chile would have closed 2020 with 28.1% of world copper production, while Peru would have fallen to 10.5%.

“There is no doubt that maintaining operational continuity – despite the widespread stoppage of economic activities as a result of the pandemic – was not an easy task; It was an unprecedented and complex challenge, but one that has paid off. This is thanks to the high commitment of the workers, to the strict measures implemented by the companies to prevent the spread of the virus, and to a generous and active collaboration in the sector and with local and national authorities ”, said the executive president of the Mining Council, Joaquín Villarino , who called on companies in the sector not to lower their arms and maintain the strict protocols established.

In this scenario, Juan Carlos Guajardo points out that Chile continues to be perceived as having institutional and macroeconomic stability, in addition to having an environment for business development and a support infrastructure for high-level mining.

“In the case of Peru, the challenge in the short term is to return to production levels prior to the pandemic. Beyond this consideration, medium and long-term growth in Peru will come from the hand of new projects, which will have to face a more challenging political environment ”, adds the expert. 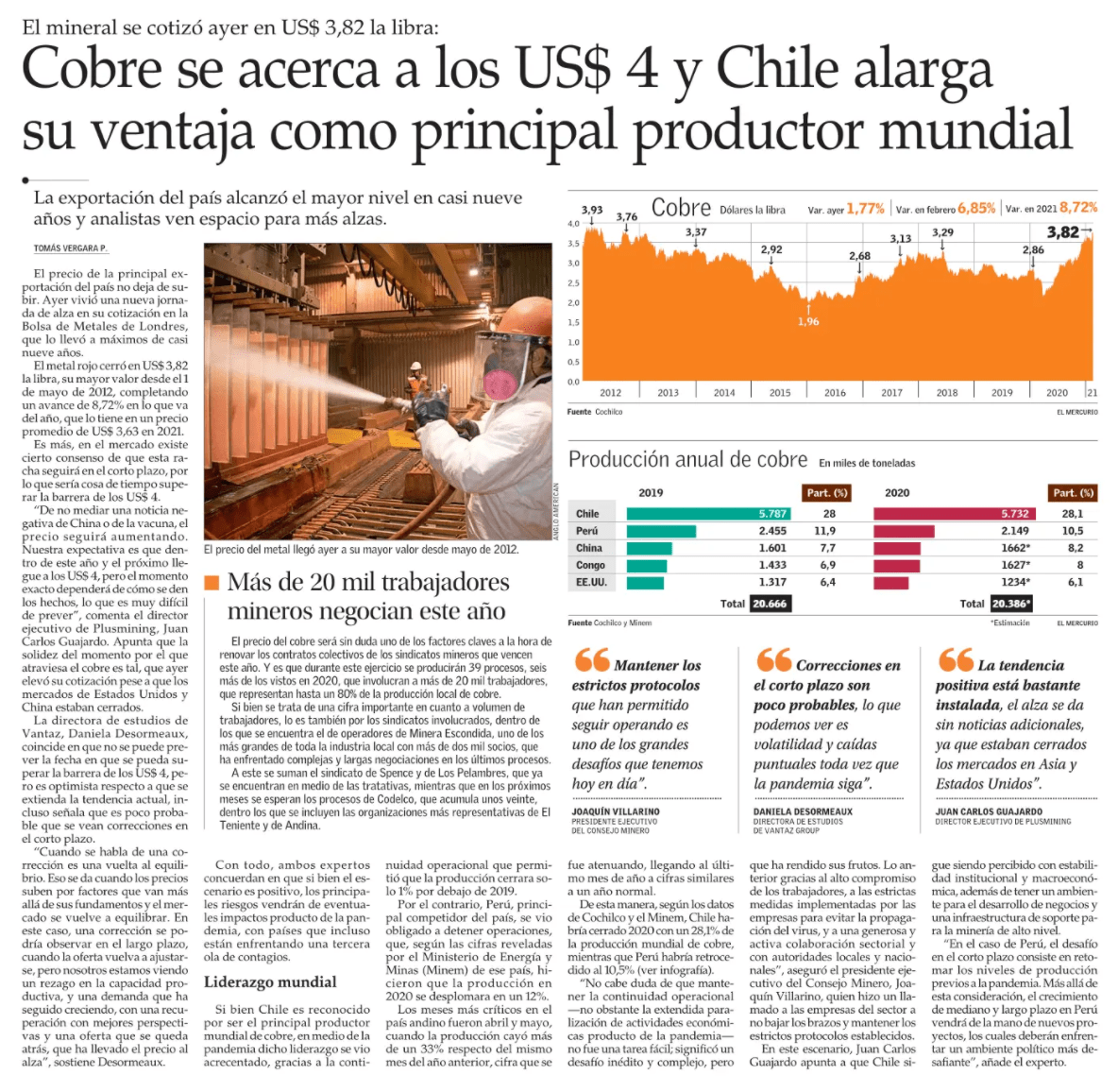