Home » La Tercera » Is copper on the way to US $ 5 ?: After exceeding US $ 4, a new historical price level is sighted
La Tercera

Yesterday the red metal rose almost 3%, closing at US $ 4.11 a pound, its highest value since September 2011. Among specialists there is consensus on an extension of the rally, due to the accumulation of factors, structural and conjunctural, that are behind your current momentum.

The ascending route through which copper has traveled since mid-2020, the year in which it accumulated an increase of 67.65% from the lowest point it reached in March, is being extended for kilometers in 2021. In the seven weeks that have elapsed in the year, the red metal accelerated its march with an additional increase of 17.12%, thanks to which this Monday it exceeded the threshold of US $ 4 a pound for the first time since September 2011 – to US $ 4.11 with an increase almost 3% -, while expectations grow that it will break new records that even exceed US $ 5 a pound, as the Chilean economist based in New York, José Luis Daza, raised this Sunday in an interview with Pulso.

“The price of copper is following an important rally, it has important increases and that is obviously good news for our country. We are one of the main copper producers in the world and that the price rises, obviously it is very good for the fiscal coffers and also because it can mobilize more investment in the mining sector and that can mean more employment. That is exactly what we are looking for ”, said Rodrigo Cerda, Minister of Finance, in light of the milestone reached.

The $ 4.11 is in line with Goldman Sachs’ three-month price target, the bank that offers the most bullish estimate in a year, targeting $ 4.76 a pound. “The fundamental outlook for copper remains extremely optimistic, with no evidence that current price levels are still stimulating effects to reverse fundamental tightening trends, both spot and forward,” says the team led by Nicholas Snowdon, Metal strategist of the entity.

The optimism is repeated among the experts. Sudakshina Unnikrishnan, Base Metals Analyst at Standard Chartered, said “Copper remains our preferred exposure across the base metals complex, and price gains are supported by a combination of broader macro and fundamental factors.”

From his point of view, “several factors augur well for further price increases: relaxed monetary policy, stimulus packages, the broader downtrend of the US dollar, and expectations of improving global economic indicators due to vaccine launches. ”. To this he adds “the emphasis on stimulus packages and incentives focused on renewable energy, electric vehicles and a broader shift towards decarbonisation that supports demand, especially for copper and nickel.”

This analysis coincides with that of Juan Carlos Guajardo and Eric Medel from Plusmining, who recall that “in real terms, the price of copper has been above US $ 5 per pound at very specific moments in its history. At 2021 prices, the last record in the price of the metal occurred in February 2011, closing above US $ 5.3 (US $ 4.6 per pound in currency at that time) ”.

That said, both specialists argue that to return to that level “there must be very acute factors in the following elements: market imbalance, favorable economic conditions, high investor appetite, low inventory levels, risks of disruption in production. Given the current scenario, so influenced by exceptional situations, it cannot be ruled out ”. In this sense, Daza stated in the interview that “I would not be surprised if in the next twelve months the price of copper exceeds US $ 5 and eventually US $ 6”, emphasizing that “the probabilities that we will see these levels are the highest in recent times. If I were a copper consumer, I would protect myself for that scenario ”.

“The key reason why the copper market is evolving in such a tight direction is, in our opinion, due to the very strong demand conditions, both in China and now in key western markets,” they argue at Goldman Sachs.

Indeed, in addition to the Chinese, who have been pushing the car since the middle of last year, other powers are beginning to stretch their legs after the intermittent confinements required by the collective prevention of the pandemic.

Chile’s second trading partner stands out in this scenario: the US According to the most recent IMF expectations report, this year that country will register an expansion of 5.1%, much higher than that projected for the year. October report of last year: 3.1%.

This is an upward correction of expectations that is also observed in the forecast for the world, which rose from 5.2% to 5.5%. According to the organization led by Kristalina Georgieva, all this reflects “expectations of a strengthening of activity driven by vaccines later in the year”, an environment in which copper, considered a barometer of global growth, feels very much at ease. taste.

In this recovery, and consequently in the increase in the price of the metal, fiscal and monetary stimuli play a fundamental role. “The strong rise experienced in recent weeks and sharpened in recent days, is explained, in the short term, by a greater appetite of investors backed by the large financial stimuli provided by governments due to the pandemic and which have generated a high liquidity ”, indicate from Plusmining.

In this case, the US would also play a fundamental role in encouraging copper, according to JP Morgan, where they emphasize that if in 2020 the “stimulus driven by infrastructure” deployed by Beijing contributed to a large extent, in 2021 one of “Similar characteristics” in the North American country will generate a boost with enough liquidity.

“Despite vaccines on the horizon, in the short term the case count remains high and central banks are likely to maintain plentiful liquidity until Covid-19 is finally under control. The pending stimulus plan from the US will also boost confidence when it is finally announced, ”says the JP Morgan team led by Po Wei, a base metals analyst.

But not everything revolves around the recovery and the stimuli linked to the pandemic. “Decarbonization, along with an increase in the popularity of renewable energy and electric vehicles, could start another period of sustained increases in demand” for copper, they point out in the most recent report on the matter from Bank of America. “Taking into account the increased demand for electrification, the growth in potential consumption could reach around 3% between 2022 and 2025, compared to 2% in the last thirty years,” they detail.

This analysis is fully shared by Unnikrishnan. “A focus on infrastructure renovation and ecological recovery, with a greater emphasis on electric vehicles, renewable energy and clean energy, indicates a higher demand for copper,” he says.

Meanwhile, in Chile, Guajardo and Medel affirm that the positive levels of copper prices can be sustained over time thanks to elements such as “the transition to clean energy, the interconnection of consumption sources and the expansion of information technologies ( data centers), which will be followed with greater force in the second half of this decade by the entry of electric vehicles and support infrastructure ”.

Another edge to consider among the elements that drive copper is what happens with the supply. “The very low starting point for inventories earlier this year has been further exacerbated by a stock decline against seasonal so far in the first quarter, on a scale seen only once before in recent history (in 2004 ) ”, They point out in Goldman Sachs, based on the 76,550 metric tons of copper inventories that are counted in the London Metal Exchange and that contrast with the 163,425 that were counted a year ago.

To the above, the same bank adds the fact that “the absence of important new approvals for copper projects so far in 2021 reinforces the need for higher prices to encourage such decision-making.”

More details on the matter are offered from Plumining, indicating that “recent years have been characterized by a mining industry with low levels of investment, as a result of the end of the ‘super cycle, since the priorities of the industry have been efficiency and control costs and not growth. In this line, the growth of the supply has occurred rather from expansions in existing mines, over new mines, also subject to growing challenges in their implementation, including community and environmental aspects ”. 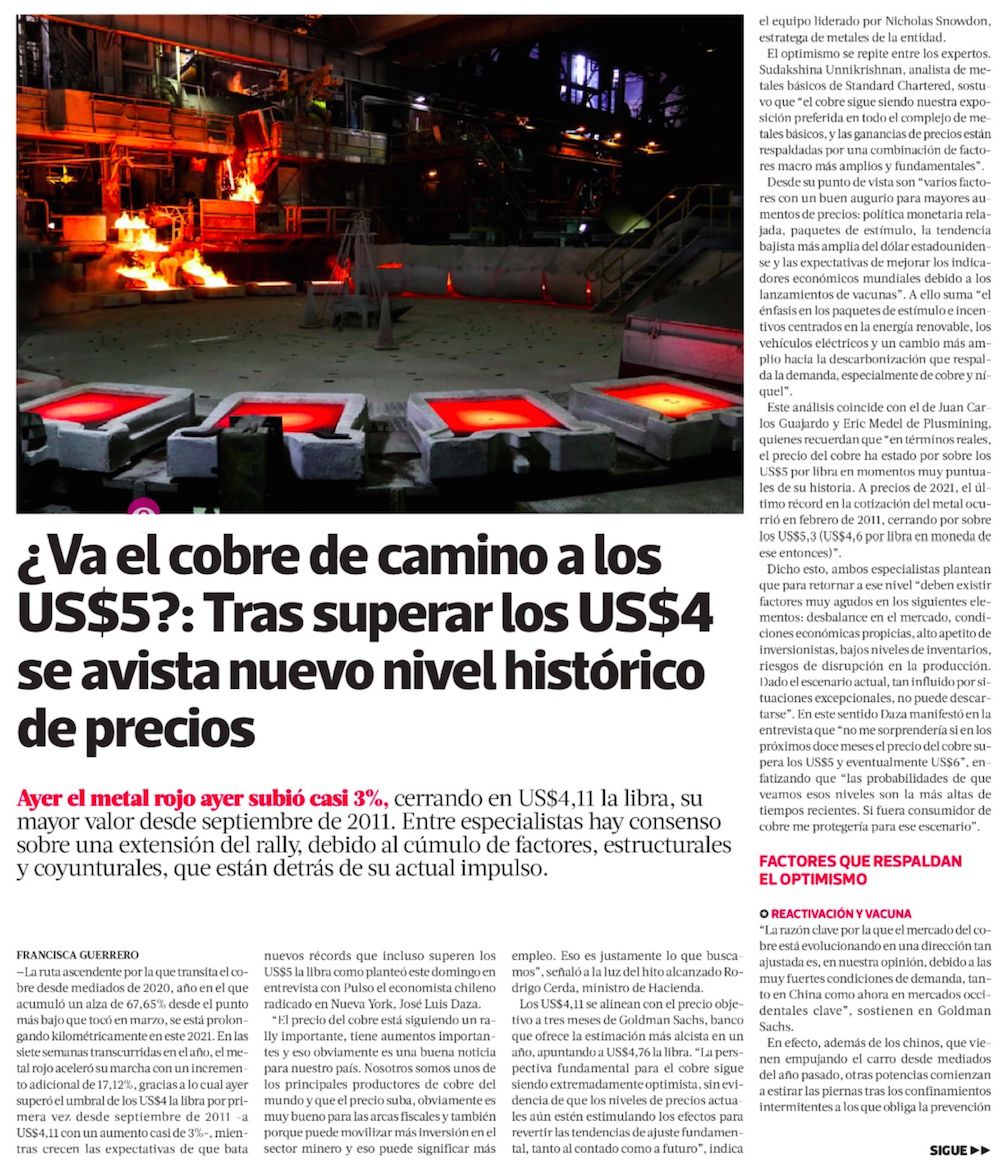 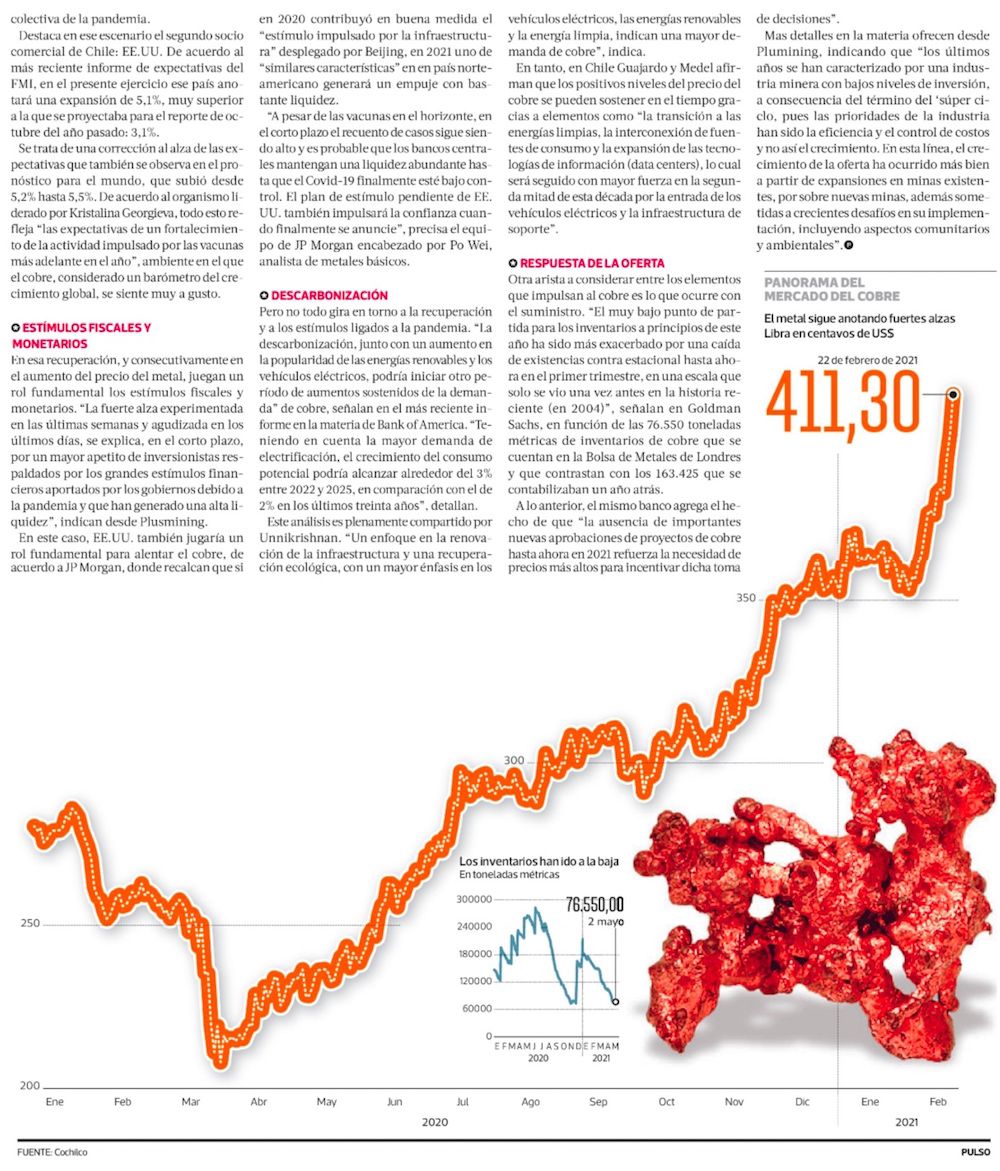