Experts agree that the lack of a regulatory framework is holding back the ability to carry out new projects in our country, beyond the expansions of SQM and Albemarle in the Atacama salt flat. A significant reduction in Chile’s market share in lithium production states the latest Bank of America report. If in 2015 our country was responsible for 37% of world availability, against 35% of Australia, this nation took a great advantage in six years, monopolizing 43% of the global lithium market, followed from afar by Chile, with 27%, and with an important one from China (16%).

According to experts, the decline is due to the difficulties for the development of the local industry for some years, in which the promotion of new projects has been hindered.

“The main problem has been the lack of a clear regulatory framework, which allows the development of new projects, being clear on how to obtain permits for the exploration, extraction and commercialization of lithium. What has happened is that the current operations in the Atacama salt flat have maintained and increased their production and have expansion projects.However, there is a lack of new projects that could enter production, unlike what is seen in countries such as Australia ”, assures the senior analyst of the global consultancy CRU, Francisco Acuña.

The director of Plusmining, Juan Carlos Guajardo, agrees on the lack of a regulatory framework for the industry, and recalls that in Chile lithium is defined as a non-concessional mineral, so the current production of an exceptional mechanism, which is the lease of Corfo’s property in the “Atacama salt flat.

This reflects that the country has important differences from the political point of view that it has not been able to resolve. There is also the environmental issue, which puts more and more pressure on the supply, especially desalination, which is the one that occurs in Chile.A third element is the difference in lithium carbonate that is produced mostly here, and hydroxide (of greater value aggregate for the battery industry), which is the one produced in Australia, where it exists mostly. This has favored its growth ”, explains Guajardo. Francisco Acuña adds that even Argentina is seeing greater dynamism in the mineral industry, due to the development of new projects, which also has an impact on the loss of market share. “This is not due to a lack of financing, because it has been seen how initiatives have been developed such as in Australia, Argentina, Brazil and Mexico, however, the lack of regulatory clarity has meant that this has not been solved for more than five years”, explains the executive.

Despite this, the Bank of America report highlights the La Negra III and IV projects, with an expansion of 40 thousand tons of lithium, owned by Albemarle, which would start commercial production in 2022. While SOM aims to reach 2,180 thousand tons of carbonate and 30 thousand of lithium hydroxide that same year.

All this occurs in the midst of a rebalancing of supply and demand in the world market, after in the last biennium, as a result of the oversupply and the effects of the pandemic, prices fell sharply, causing a slowdown in lithium production. “Deepening demand, EV sales have accelerated even as the covid pandemic unfolded, heavily influenced by the continued focus on decarbonization. Looking ahead, we believe the risks to demand are skewed to the upside. Until then, if the Biden administration achieves that electric vehicles have a 50% share of sales in the US. By 2030, global demand for lithium could reach 2.1 million tonnes that year, compared to our baseline scenario of 18 million tonnes, ”says the Bank of America report. Along these lines, the recovery in global demand could cause the value of the lithium market to rise from US $ 6 billion today, to US $ 36 billion by 2030.

According to the investment bank, junior companies had invested heavily in recent years, contributing to the oversupply prior to 2020. But as prices fell, projects were canceled or delayed, warning that the future of mineral it depends on production discipline, since if miners increase extraction to nominal (potential) capacity, the lithium market runs the risk of experiencing a material oversupply in the coming years. 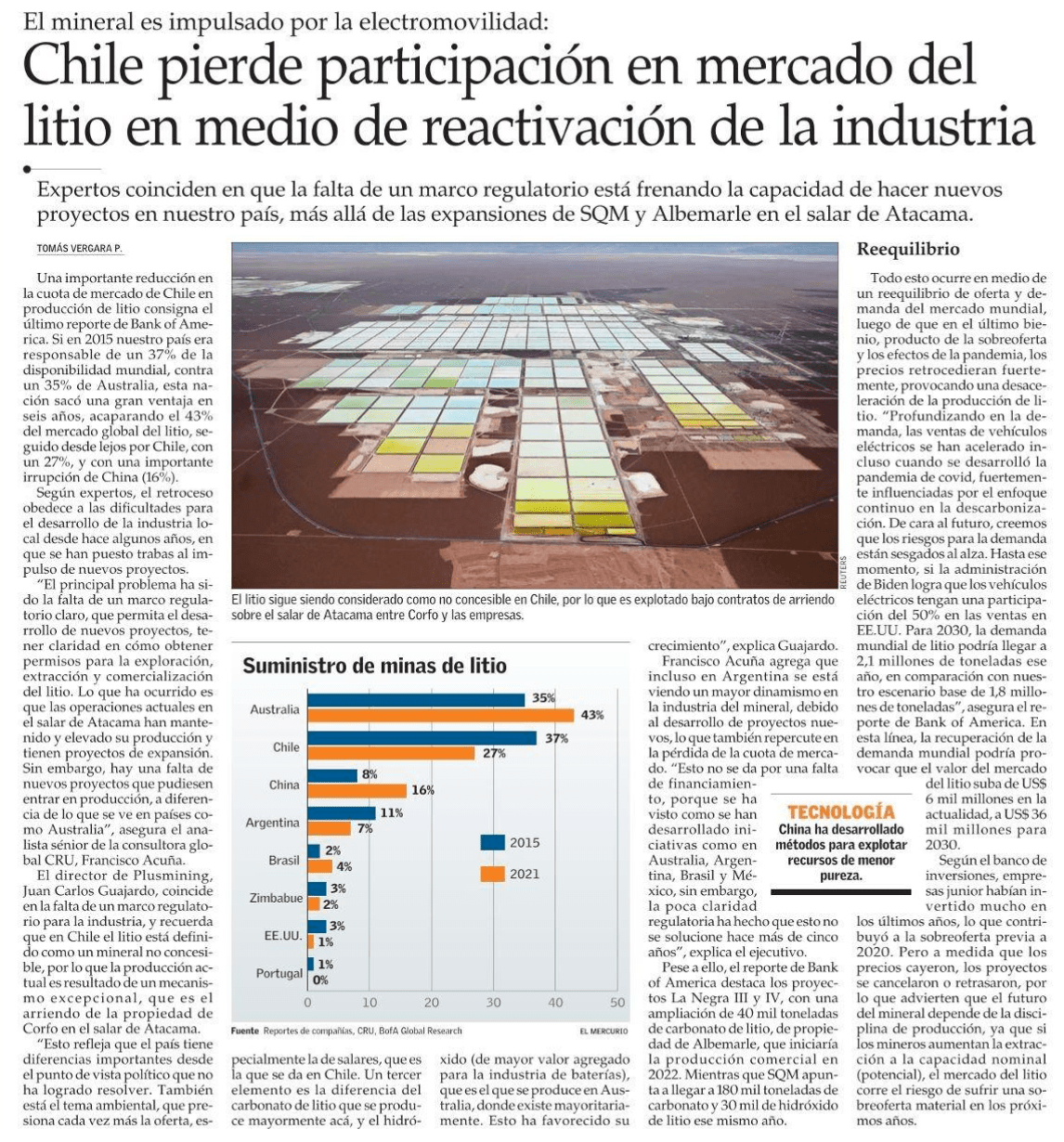