On Monday, the red metal closed at US $ 2.96 a pound, its highest value since March 2019. At Goldman Sachs they see it as one of the preferred commodities to maintain a long position.

The coronavirus was expanding around the globe and copper suffered from it, suffering a severe blow that left it at a minimum of US $ 2,095 on March 23 of this year. However, since then Chile’s main export product has seen a jump of 41.7%, accumulating a rise of 6.3% so far this year. This Monday it registered a value of US $ 2,969 a pound.

This is its highest level since March 5, 2019, which it achieved after the 3.52% rise in trading on Monday, which, in turn, is the most forceful since early April. In this case, the increase was due to “the growing risks of lower production in Chile due to possible strikes,” says Juan Carlos Guajardo, CEO of Plusmining, in an opinion shared by Goldman Sachs, which warns about the concerns of mining unions in the country, faced with the advance of the virus.

This is one more ingredient in the upward pressures that come from the supply side, a plane that also includes the already internalized “production restrictions by Covid-19 in Peru, Panama, Indonesia and the United States,” says Guajardo. . However, it is the pressures on the demand side that can give greater sustainability to the good price level that the red metal holds.

According to the report by the appointed US bank, as in China “the engine of growth is investment, the metal markets are not only facing upward pressure on their cost structures, but are also facing strong growth in direct demand, which has supported both deferred prices and long-term prices, particularly for copper. ”

In this framework, the US bank specifies that “throughout the metal complex we like a long position in copper, silver and steel. We like copper more, since it is the product most exposed to the Chinese recovery ”.

In this regard, Goldman Sachs points out that “we have shown that Chinese demand for copper continues to grow 2 to 3 quarters after the Chinese stimulus has been withdrawn, suggesting that this current rebound reaches 2021.”

“Given the lag that has been observed in the recovery of world economic activity, the fact that China is a couple of months ahead of the rest of the industrial powers in the world has made its specific weight even greater in demand copper ”, highlights Guajardo, in relation to the relevance of the recovery of the Asian giant.

In this framework, Tomás Flores, LyD economist, stated that “the robust price recovery, which in the first semester reached US $ 2.49 per pound, could lead to the annual average approaching what is considered in the Budget 2020, which implies tax revenue of 1.2% of GDP, which is equivalent to approximately US $ 3.4 billion”.

Additionally, the good momentum of the red metal is allowing a strengthening of the local currency. Yesterday the dollar closed at $ 786.76, after posting a decrease of $ 10.23 on the day, which is equivalent to a daily drop of 1.28%. Thus, the US currency has dropped $ 81.84 from its highest level on March 18, despite which it remains $ 30.6 above the level with which the year started. 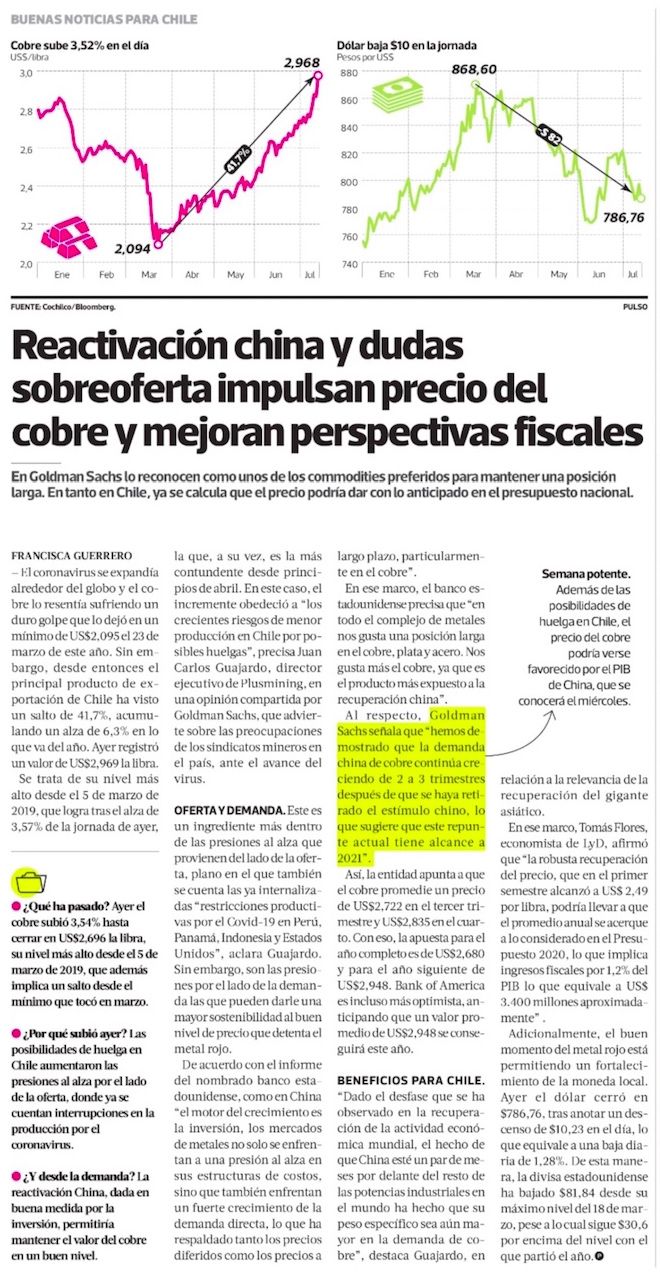