From the industry it is expected that in the coming months the fall will continue to accentuate and that it will continue until 2021.

The mining industry has been one of the few that has managed to navigate with Covid-19 without major inconveniences, also favored by a copper price that has been at its best levels in recent years for several weeks.

However, the effect for the production of the restrictive measures taken to prevent the spread of the virus is already beginning to be noticed and this is shown by the figures of the Chilean Copper Commission (Cochilco) in its monthly bulletin for July.

Specifically, copper production in the seventh month of the year showed a fall of 5.1% compared to the same month of the previous year, that is, from 486.8 thousand tons of copper to 462 thousand tons. For the consulting firm Plusmining, the year-on-year decline in copper production in Chile in July “is to be expected within the framework of the consequences of the operational maintenance policy that successfully managed to maintain production in the first part of the year, but given its demand, it will begin to impact lower production levels in the second part of this year and in 2021 ”.

“This is because the companies restructured their mining plans to maintain more stable production during the first half. This was observed until June, but already July gives us the first signs of a drop in production, “said Cochilco executive vice president Marco Riveros.

The general situation by company continues the downward trend, where Codelco, for example, had a 3.7% drop compared to July of the previous year. Given this, Riveros explained that the decline is explained by lower production in its divisions El Teniente (-23%) and Ministro Hales (-27.2%). “In both cases the decrease was due to less mineral treatment due to the pandemic. This affects the productive plans of the state company, just as it has done with the rest of the industry ”. Spence and Los Bronces were also hit hard this month, falling 42.9% and 31.3% respectively.

From the other side, both Escondida and Collahuasi showed a better performance than in July 2019, increasing 3.8% and 22.8% respectively.

In the case of Escondida, Riveros said, the first half of 2019 “was not a very good year for the operation, since they were affected by lower grades at the concentrator. This is how, even with the reduction in personnel that occurred as a result of the pandemic, it has managed to exceed during July 2020, albeit slightly, the production of the same month in 2019 ”. 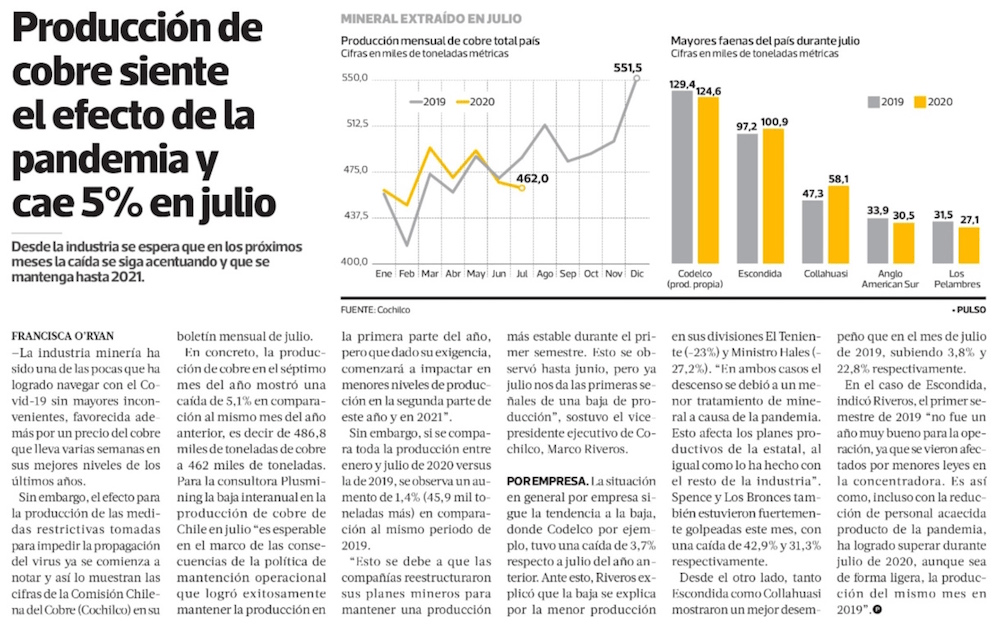