CHILE IS THE SECOND WORLDWIDE PRODUCER

As it is a by-product of copper, there is no supply management in Chile, which this year also increased in countries such as the US and Peru.

Up to 8.8% has grown. The local production of molybdenum as of September, according to the latest figures from the Chilean Copper Commission, reaching 44 million tons.

The increases have come from the hand of Codelco, the main player in the local market, whose production shot up 34%. In the case of Collahuasi, the increase has been 78%, but its weight in the market is much less.

However, this industry has been affected by the effects of the pandemic, which have made the historical values ​​that have been seen in recent years fall. Thus, as of October, the value of the by-product reached US $ 846 per pound, which represents a 28% drop versus the same period in 2019.

“The problem is that unlike copper, molybdenum has had production increases and not only in Chile, but also in Peru, despite the fact that that country has reported significant falls in copper. That has been impacting the price, which should be higher due to demand for steel, which has been strong in China, but it has not been enough. There is a lot of product on the market that has slowed down the price ”, explains the executive director of Plusmining, Juan Carlos Guajardo.

“The demand has been low; in fact, the Chinese are importing because they stopped their production and have kept up with the demand. I am surprised that the price has not fallen more, about 6 years ago the price was 4-5 dollars. As the pandemic is overcome, demand should recover and also the replenishment of stocks, which would lead to a more interesting price, above US $ 10 “, interesting president of the consulting firm Molyexp, Pablo Bascur.

According to experts, the negative trend could extend for several months.

Meanwhile, the price of copper had a new push, after trading at US $ 3.15 thanks to the impulse that gave greater clarity on the outcome of the elections in the United States: Until yesterday the market internalized the triumph of Joe Biden, which due to the depreciation of the dollar for the next few months. “On the one hand, the new authority favors the implementation of a stimulus program greater than the one proposed by the outgoing authority and, on the other, the balanced composition of the Senate reduces the risk of a rise in corporate taxes,” they highlight from Cochilco.

This is in addition to the fact that during this week the dollar depreciated to its lowest level in more than two months against a basket of currencies of the main trading partners of the United States, boosting the price of the mineral.

MOLYBDENUM IS A BYPRODUCT OF COPPER MAINLY USED AS A RAW MATERIAL TO OBTAIN ALLOYS, AMONG THE STRONGEST STEELS. 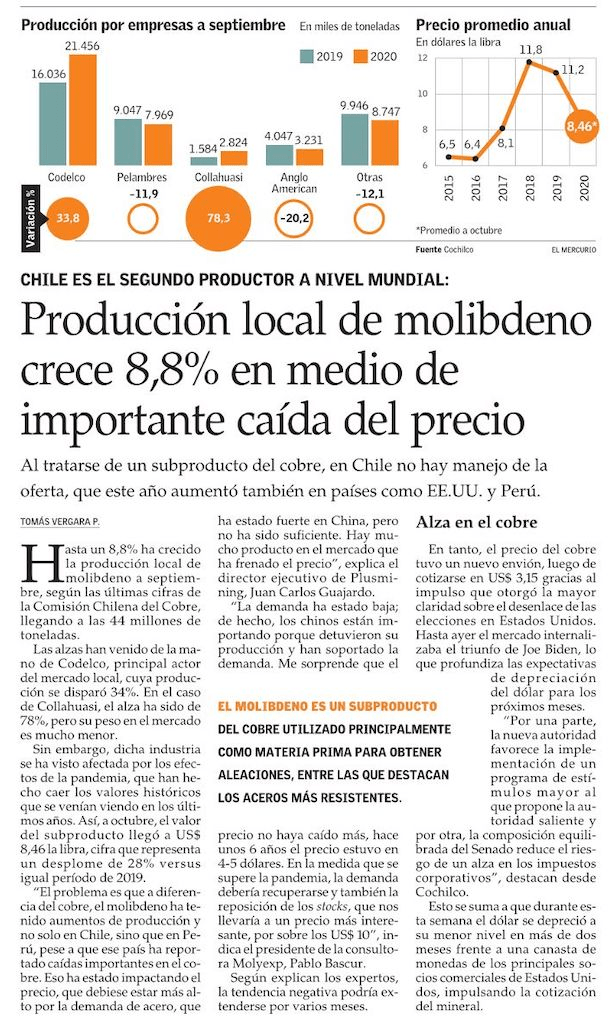