Cochilco reiterated that for every penny that the mineral rises, values ​​of US $ 58 million are created, associated with taxes, exports and surpluses contributed by the state company Codelco.

The Chilean Copper Commission (Cochilco) released yesterday its latest estimates for the average annual price of the country’s main export.

Although the Budget Directorate of the Ministry of Finance has differed from the calculations made by the experts and by Cochilco itself, since the latter they argued that the creation of value – which is not exactly the same as what will be collected by the Treasury – it is about US $ 58 million for every extra penny that the ore rises.

Thus, the update planned for this year is valued at more than US $ 750 million, which will be added to another US $ 290 million in 2021, which includes payment of taxes, exports and Codelco surpluses, among others. economic variables.

It is supported by experts, such as the consulting firm Plusmining, where they made a short and long-term estimate of the mineral in different stages of the economy. “Our calculations indicate an average value of around US $ 50 million for every penny, but the differences occur when one estimates the values ​​depending on the period. For example, during the copper supercycle, there was such a high amount of income that every penny that varied had a huge impact, but when the price falls, it is different, so you have to be careful with regard to the period under consideration ” , warns the executive director of Plusmining, Juan Carlos Guajardo.

Along these lines, Gustavo Lagos, the Mining academic from the Catholic University, maintains that his calculations are similar, and that if the price remains around US $ 3, the industry’s contribution is over US $ 50 million . “When the price goes down, this gets complicated. For this year the proportion is a little lower, because when it is at US $ 2.7 there are companies that are just beginning to make a profit, but the calculation of US $ 20 to US $ 24 million of the price is below US $ 2.5 . Besides, only the GPM-10 (10 largest operations in the country) is considered and not the GPM-20 ”, points out Lagos.

However, the Minister of Mining, Baldo Prokurica, highlights the contribution of the industry in the midst of the current crisis.

“Copper is our main export product, and a great contributor to the fiscal coffers to finance the necessary social programs. Every penny of the dollar means more resources so that the State can fulfill its commitments. This year alone, and despite the pandemic, the contribution of mining to the Treasury will be almost US $ 3 billion, “says the authority.

“Next year there will be 31 regulated collective bargaining processes in large copper mining companies, including Codelco, AMSA, Escondida, Los Pelambres, Spencer, Anglo American and Collahuasi. A fraction of these negotiation processes would take place in a scenario with a high copper price, higher than US $ 3 per pound, ”warned the coordinator of the Cochilco Mining Market, Víctor Garay.

The local industry is expected to be around 6 million tons in 2021. 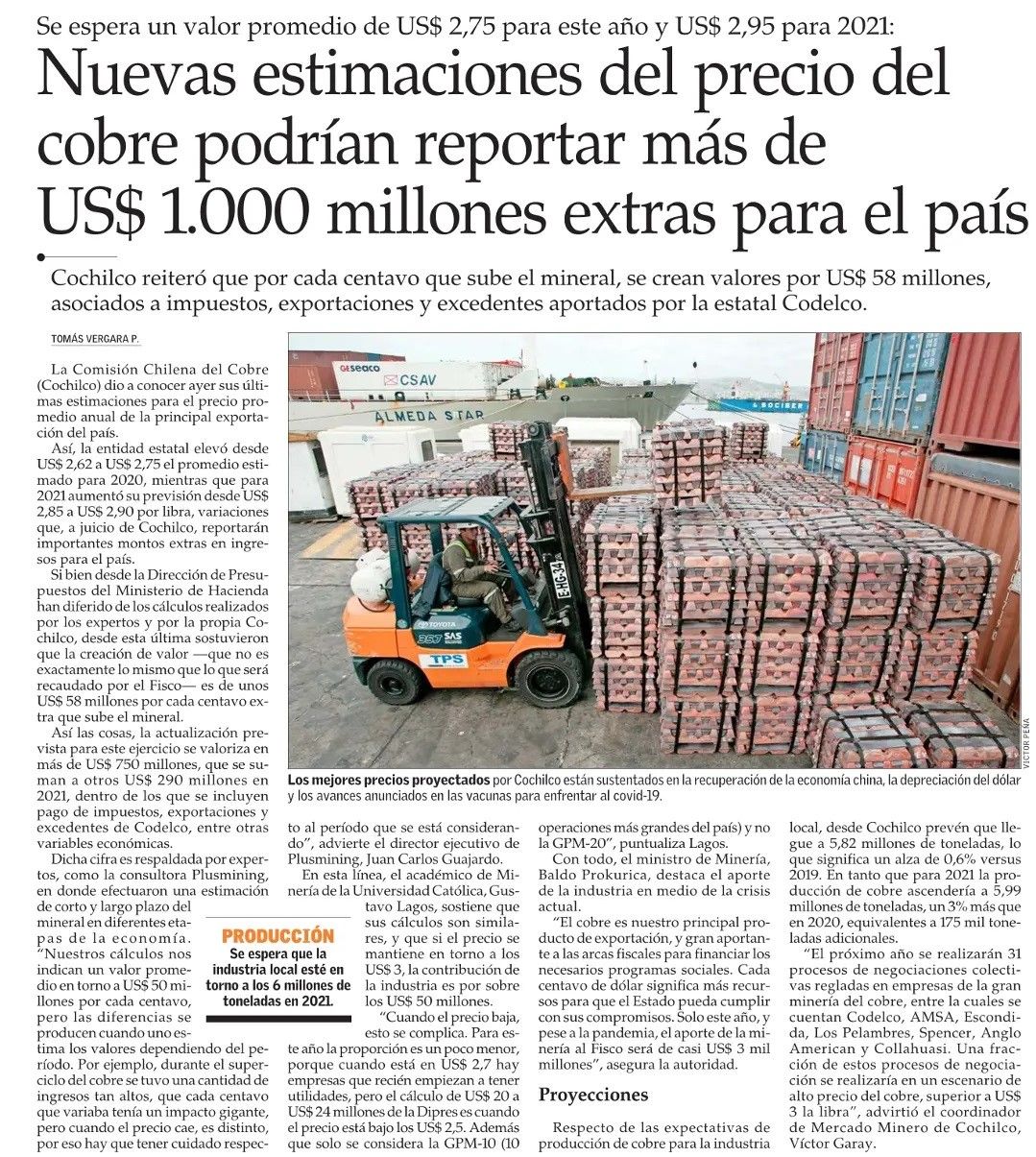