According to figures from the Central Bank and missing the data for the last fortnight of the year, mining rose 2.6%, while the red metal almost 1%. Thus, total shipments abroad fell 3.5% year-on-year. On the import side, despite the final recovery they showed in December, they are heading to end the year with a sharp drop of 21%.

When the coronavirus crisis spread throughout the world, the World Trade Organization warned that international exchange risked a drop of up to 32% in 2020. However, the blow was much less brutal, with an update of the estimates to one 9.2% drop this year.

Chile did not subtract from this more favorable panorama, thanks to the fact that copper and mining in general allowed the export sector to avoid the year of the coronavirus. With the data recorded by the Central Bank until December 15, shipments total US $ 67,416 million in 2020, which although qualifies as the weakest annual figure since 2016, represents a fall of 3.5%, lower than that of was scored in 2019.

Last year, when the news that shook the markets was the trade war between China and the United States, the decline was 7.1%. The decline in 2020 is also a long way from the 17.4% collapse that was marked in 2015, when the end of the commodities super cycle dragged the export sector, or the 14% of 2009, in the framework of the financial crisis .

“The export sector is at pre-pandemic levels, that is something to celebrate and highlights the importance of the network of agreements, because today we see a 35% drop in those markets that are not covered by free trade agreements” , says Rodrigo Yáñez, undersecretary of International Economic Relations in the light of the data.

To avoid collapse, the contribution made by mining was key. In the absence of data for the last fortnight of the year, the sector already recorded an increase of 2.6% to US $ 37,409 million, which contrasts with a decrease of 8% that was observed in 2019. In that photograph, copper made its contribution , with US $ 33,876 million in exports, which represents an annual increase of almost 1%.

“In an exceptionally complex year due to the pandemic, mining will allow the country’s export earnings to remain at reasonable levels”, highlights Juan Carlos Guajardo, director of Plusmining.

From his point of view, the contribution of the aforementioned sector is explained by three factors: “The capacity of the mining industry to maintain operational continuity, the high prices of commodities will more than offset the production drops caused by the pandemic and the extraordinary performance of iron and gold, which will add unexpected income until a few months ago ”.

The mining performance contrasts with what happened in the rest of the national exports. For example, with US $ 5,686 million, the agricultural sector suffers a fall of 15.2%, a decrease even higher than the 9.8% seen in 2009.

In any case, Yáñez highlighted some high points in this segment: “It is interesting to see how, for example, pork meat, frozen fruit and fish oil have grown, reaching record levels.”

Meanwhile, shipments from the industrial sector reached US $ 24,320 million, a reduction of 9%, a decrease somewhat greater than the 8.4% observed in 2019. It should be noted in this area that in December there was a rebound, since only with the data of the first two weeks, it exceeds by 0.9% what was previously exported.

However, a start on the right foot is anticipated in 2021, amid a rebounding world economy that, thanks to the distribution of the vaccine, will be able to leave behind the confinements that the pandemic forces.

In fact, at the global level the WTO anticipates that after this year’s fall, international trade will achieve an increase of 7.2% next year, a percentage that would exceed GDP growth, which according to the same organization would rebound 4.9% , after falling 4.8% this year.

In this context, Yáñez is also optimistic about the future of national exports, an enthusiasm that he does not attribute solely to the reactivation of China and other markets.

“All countries are rushing their decarbonization and energy transition goals. The United States returned to the Paris Agreement and therefore we have an important global actor that will be in that process. All of this is good news for our copper, for the future of our green hydrogen industry, for our lithium and for mineral exports in general, ”says the undersecretary.

On the other hand, Rodolfo Vilches, director of Velasco Rioseco, emphasizes that “for the recovery of Chilean foreign trade in 2021, commercial integration with our neighbors will be key, but also the modernization and deepening of trade agreements that have been in force for many years” .

The reality of imports is different from exports. According to the Central Bank, with figures as of December 15 of this year, total purchases are heading to register the worst performance since the subprime crisis with a 21% drop, totaling shipments for US $ 55,794 million.

The main driver of this upturn has been the purchase of durable consumer goods, which has been driven mainly by the greater resources available to citizens due to the withdrawals of 10% of pension funds.

According to the governing body, purchases of consumer goods rose 15.4% (US $ 871 million), with durable products showing the greatest dynamism with a strong rise of almost 44% compared to the same period in 2019.

Further behind is the income of household appliances with an increase of 64% that means US $ 32 million.

Despite the rebound that it had in the last part of the year, imports of new automobiles do not manage to have blue figures, although they did moderate their fall in relation to the previous months and are now heading to fall 3% in December.

Imports of capital goods, a predictor of investment behavior, were also managing to overcome the crisis in December, since as of the 15th of this month it shows a rise of 0.7%. 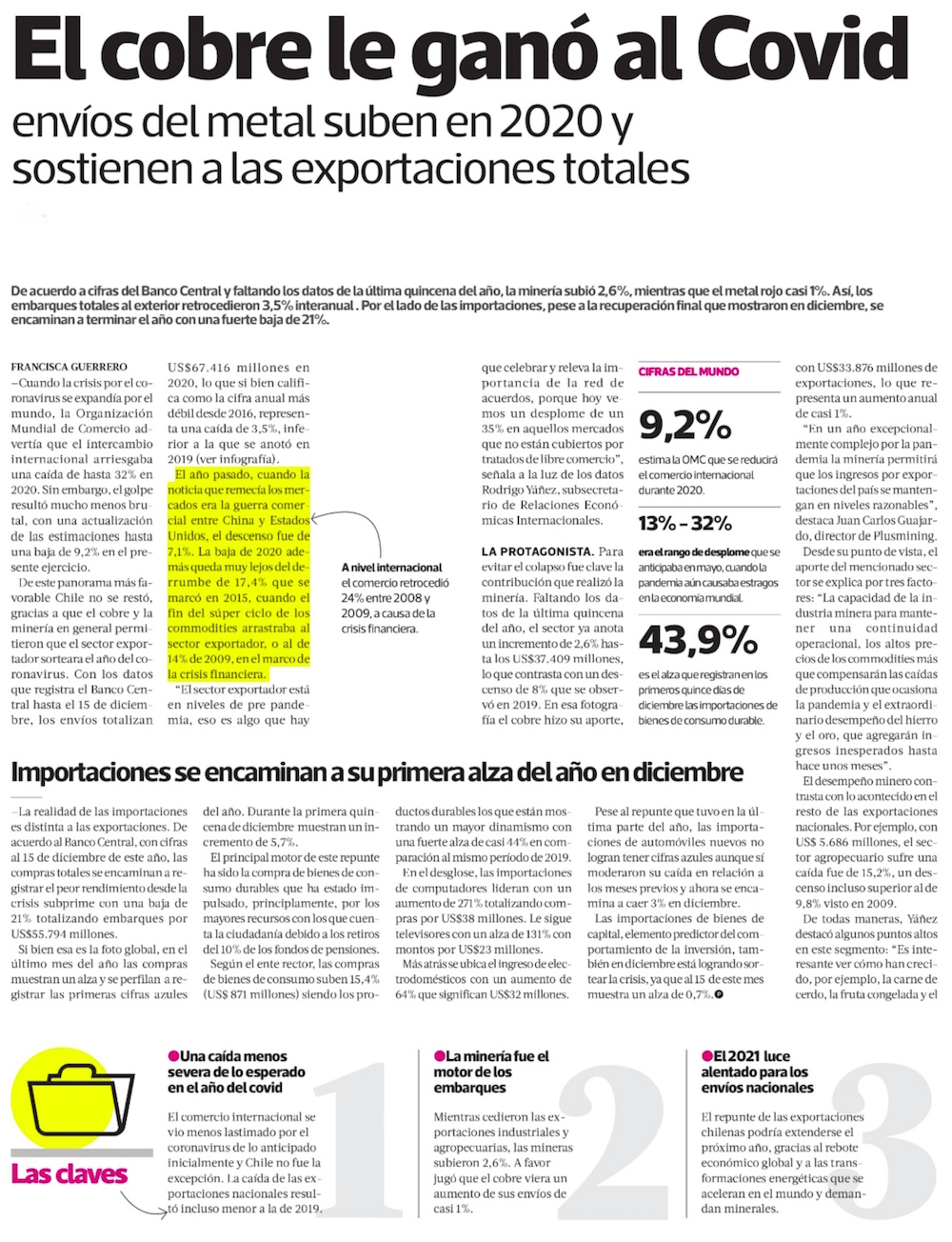 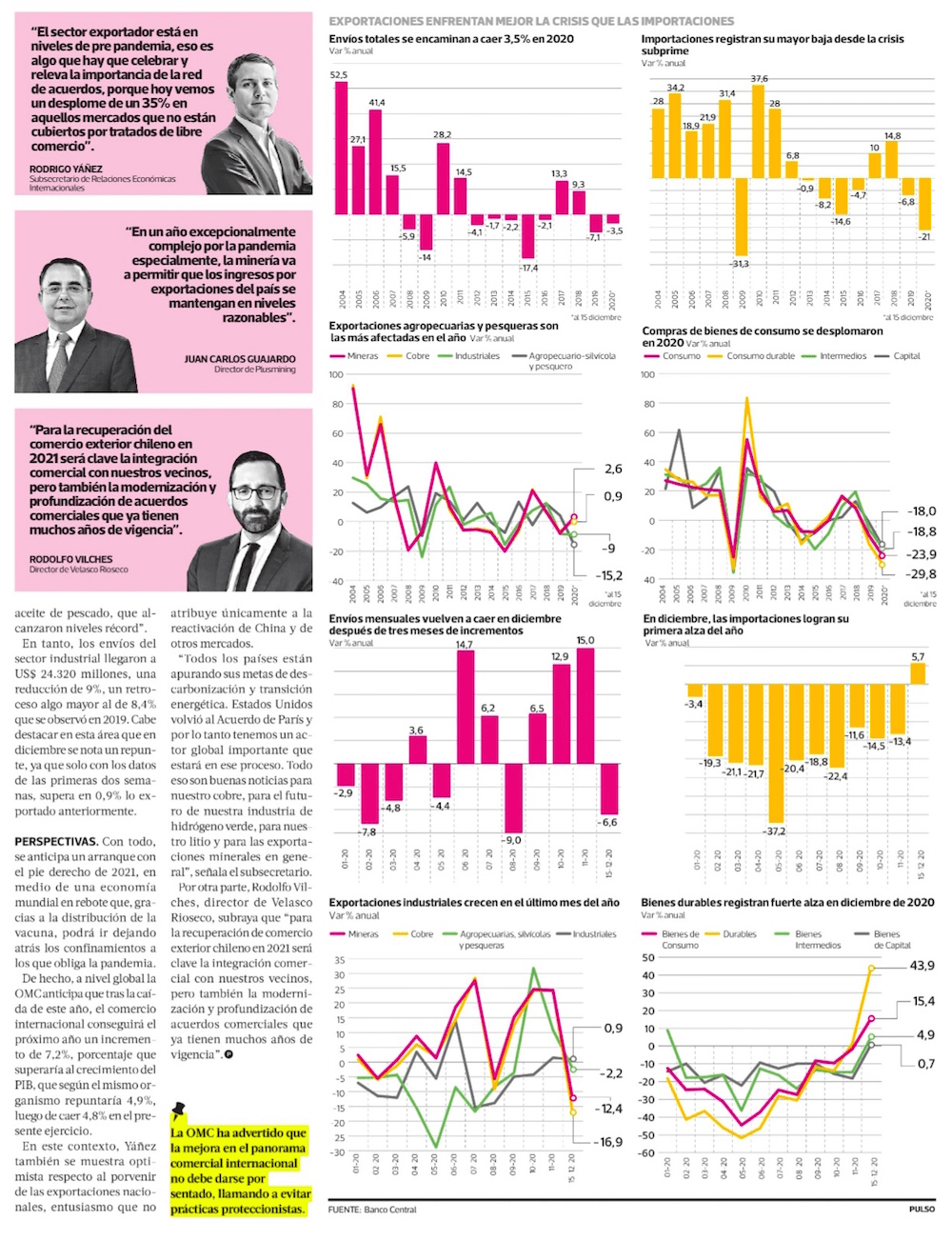