Antofagasta plc, a London-listed company, exceeded US $ 18 billion in market value after more than doubling in value in one year, which is mainly explained by the new momentum shown by copper in international markets. The trend is followed by several world miners, but not by all.

Unexpected and at the same time highly valued – at least in Chile and other producing countries – has been the rise in the price of copper. Metal is experiencing a kind of second wind in international markets: after having suffered like all raw materials with the turbulence generated by the Coronavirus in the first part of 2020, this 2021, hand in hand with the Chinese recovery, it has risen 18% (and 98% from last year’s lowest value of March 23). This has led it to values ​​that have not been seen for a decade, exceeding US $ 4 per pound and with analysts anticipating that it could even reach US $ 5 in the short term.

But it is not only copper that is valued in international markets. So have mining companies that are traded on the stock market, such as Antofagasta plc, the parent company of Antofagasta plc, the mining arm of the Luksic group and which also includes the Antofagasta-La Paz railway among its assets.

Taken in Chilean pesos, buying a share of Antofagasta plc today costs no less than $ 1,827,862.

The increase in the price of its papers has been such that today it is positioned as the most valued Chilean company listed on the stock market. According to Bloomberg, its market value today reaches US $ 18,000 million, while companies open in Chile such as Copec, which reaches a market valuation of US $ 10,500 million; Falabella of US $ 7,146 million; Enel Américas about US $ 8,000 million, or Banco de Chile, whose market value reaches US $ 11,341 million, at the close of yesterday.

The case of AMSA

Antofagasta Minerals is not listed in Chile, but in London. In fact, the headquarters of Antofagasta plc are in the English capital, even though a large part of the strategic decisions are taken in Santiago, in the group’s building in the El Golf neighborhood.

This appreciation of its papers has gone hand in hand with the increase shown by copper in international markets.

“The shares of mining companies are registering very significant increases that in many cases have taken them to the highest levels recorded. This is the case of Grupo Mexico and Antofagasta Minerals for naming two of the largest copper producers ”, explains Juan Carlos Guajardo, executive director of the consulting firm Plusmining.

In his opinion, this is explained by the same phenomenon that is observed in the case of the copper price, that is to say, “the great liquidity that exists due to the stimulus plans, leads financial actors to take positions in these actions as in raw materials such as copper, nickel, tin, soybeans, etc … and assets from emerging countries ”, highlights Guajardo, who also states that, as long as expansionary policies in large countries continue, -as the Fed and several central banks-, this trend will continue.

Indeed, when observing what happens with other copper miners, the situation is similar. Grupo Mexico, for example, has appreciated 133% in the last twelve months, while Anglo American, operator of Los Bronces and partner of Collahuasi – which is more diversified in terms of the products it produces – has done so by 54%. BHP (Escondida and Spence), meanwhile, has appreciated 82% and Glencore, Collahuasi’s partner in Chile, has risen 57%. 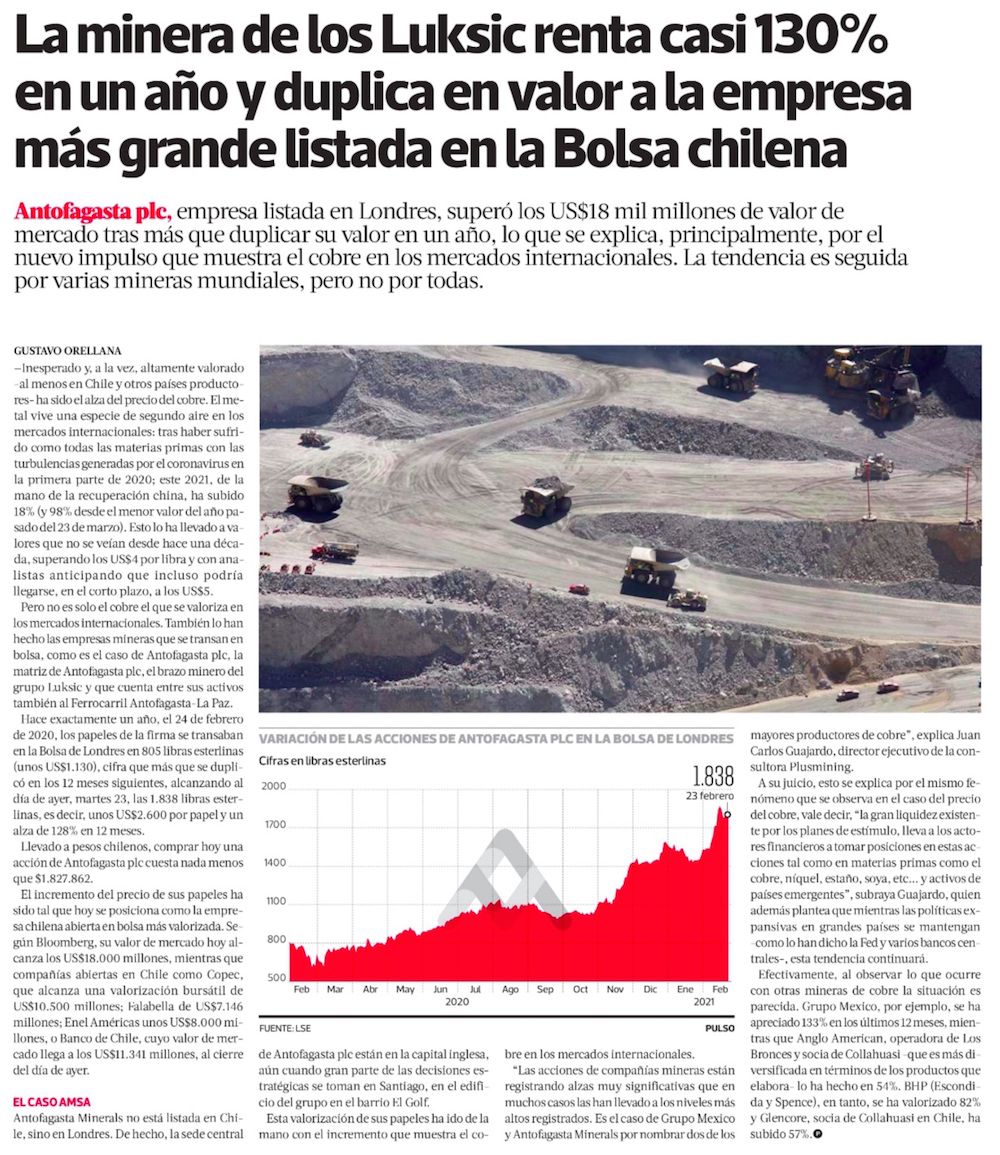