At the close of yesterday, the metal accumulated an increase of 14.3%, while the selective stock rose 17.26%. China’s performance is one of the keys for the trend to continue.

The behavior of the price of copper has been one of the best news that the fiscal coffers have received. The country’s main export has strengthened around the US $ 4 barrier for several weeks, closing yesterday at US $ 4.01 a pound. The mineral achieved a historic start to the year, completing a 14.3% increase compared to the end of 2020 during the first quarter, becoming the best start since 2009, when the advance was 39%.

But the average price of copper is also a milestone. Compared to the US $ 3.85 registered so far this year, we must go back to 2011 to find a higher level, when the metal was at a quarterly average of US $ 4.38. Experts point out that the main factors that have helped the growth of the mineral have to do with the better expectations regarding the global economic recovery, mainly in China, also linked to optimism around vaccination processes, which have raised the price .

Added to this are the fiscal stimulus packages that have been implemented in different countries, excess liquidity that is channeled into stocks, emerging countries and raw materials. All in all, the outlook for copper remains positive, in line with what was announced today by the Central Bank, and associated with the good fundamentals that exist regarding the metal. Despite this, there are some alerts that experts call to consider. “As long as the stimulus plans continue, which would be at least two years, it will be difficult for there to be a change in trend, but you do have to look at a couple of elements.

Chinese companies stopped buying, inventories have built up and the price has tended to stabilize. On the other hand, the stimulus plan of the United States is strengthening the dollar, which should be temporary, but it is having a moderating effect on raw materials ”, says the executive director of Plusmining, Juan Carlos Guajardo. For her part, the director of studies at Vantaz, Daniela Desormeaux, anticipates that the price should range between US $ 3.8 and US $ 4.4 “with a lot of volatility, because there is uncertainty regarding the new waves of infections; As long as that is not cleared up, it is difficult to see a recovery that is sustained over time.

On the supply side, it should recover compared to 2020, but still lagging behind, there are doubts about what could happen in Peru, which is going to put pressure on prices ”.

He ended with a slight stumble. Despite the fact that during the day it rerouted towards the 5,000 point border, the selective IPSA of the Santiago Stock Exchange abandoned the maximum of 14 months that it reached at noon yesterday and closed down. The 4,898.08 points with which it concluded on the last day of March meant a decrease of 0.61% in the session. But also a rise of 7.10% in March and 17.26% in the accumulated of the year. The index thus concludes its best quarter since the third quarter of 2010.

“So far this year, the IPSA has risen a little over 700 points,” says Alexis Osses, senior strategist at BCI Corredor de Bolsa. He maintains that among the factors supporting the rise in the index is the rise in the price of copper, which “explains about 210 points of the total rise.” For Jorge García, investment manager at Nevasa, the improvement in the outlook for the main economic partners of Chile, China and the US, has also encouraged the rise in shares.

Added to this is “a somewhat more stable political scene.” Hugo Osorio, head of Investment Strategies at Falcom Asset Management, agrees with this: “Uncertainty has receded and the market’s perception of the potential outputs of the Convention has begun to improve.”

In simpler words, he notes, “the harder left looks less likely to have enough votes for such radical reforms.” Added to this are the good corporate results at the end of 2020, which largely exceeded expectations. “April will be a month of caution, waiting for the corporate news of the first quarter of 2021 to continue with the traction of the fourth quarter of 2020,” says Cristián Araya, from VanTrust Capital. 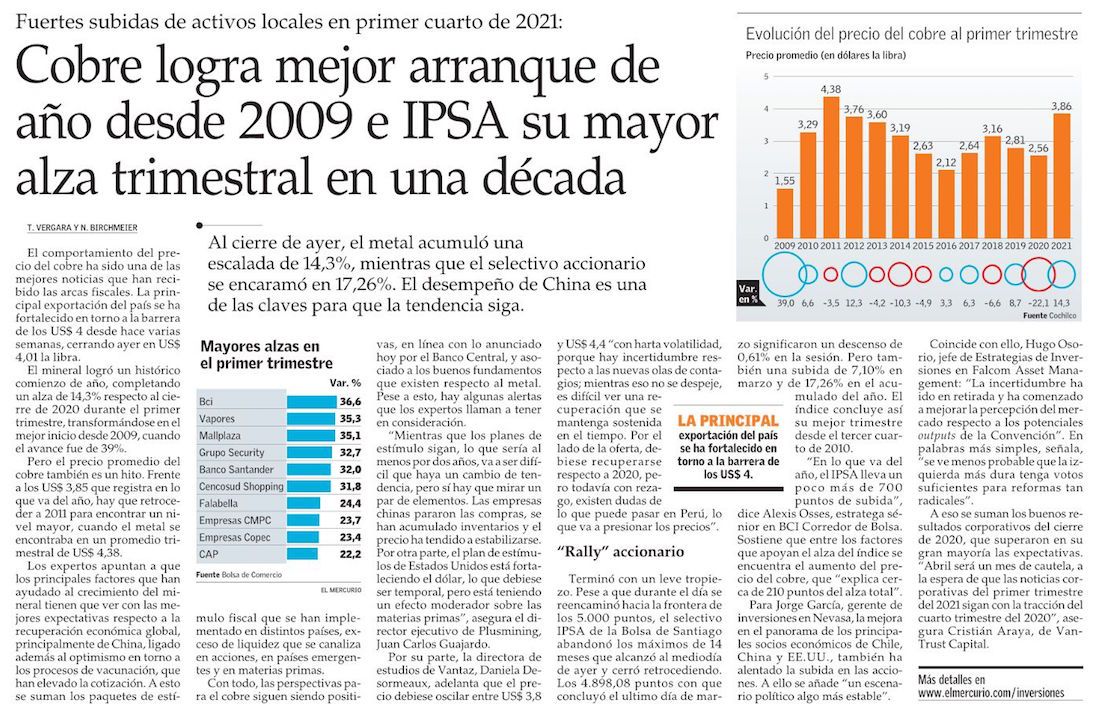