This is anticipated by Sergio Lehmann, chief economist at BCI. Meanwhile, the academic from the Catholic University, Gustavo Lagos, the contribution per pound could be at least 60 cents more than last year.

In a context of increasing pressure on the fiscal coffers, copper is offering an increasingly valuable source of income. The red metal yesterday reached US $ 4.4261 per pound, which represents its highest level since August 1, 2011 and leaves its average value so far this year at US $ 3.92.

This is a figure that far exceeds the US $ 2.8 that averaged during 2020 as a whole and that implied a contribution of $ 3.3 trillion (millions of millions) to the treasury, according to data published by the Directorate of Budget.

In this way, the calculations for this year are more than auspicious. According to Sergio Lehmann, chief economist of BCI, the State could raise “around 6 billion with an average price in the year around US $ 4 per pound.” This is an increase of 80% compared to last year.

According to the expert, these are data that are not yet explicit in the perspectives of the country’s economic authorities. “In fact, the Central Bank, which is the one with the freshest projection, predicted that the price of copper would tend to go down, reaching below US $ 4 by the end of the year.”

Although he acknowledges that BCI had a similar vision until recently, Lehman maintains that “today the sentiment is more positive than it was read a month ago. From my point of view, the scenario where the price remains above US $ 4, even around US $ 4.50 towards the end of the year, has been gaining probability ”.

This optimistic vision is shared by Ricardo Bustamante, Head of Studies Trading at Capitaria, who indicates that the boost in copper and its effect on state coffers would allow the government “to generate higher fiscal spending to support economic reactivation.”

For his part, Gustavo Lagos, an academic at the Catholic University, highlights that the copper market is tight mainly due to demand from China, a country that, if it grows more than expected, could further adjust the scenario.

In this framework, he points out that it is easy for copper to reach an average value of US $ 4 this year, a framework in which he specifies that the State could collect a minimum of 60 additional US cents per pound, in relation to what it obtained in 2020. For 2021, the last Dipres Public Finance Report anticipated an average price of the metal of US $ 3.35 per pound.

“If it stays at US $ 4 (the annual average) all the companies that import, that is, those that pay the most taxes, will make a profit. That has not been the case in the last two years and that is also important to say, ”says Lagos, who points out that in 2019 Cerro Colorado, Quebrada Banca and El Abra did not record any gains.

In this regard, Juan Carlos Guajardo, executive director of Plusmining, that with the current average of US $ 3.92 “there is a relevant difference with the reference price of copper for the estimation of the Cyclically Adjusted Balance of the Public Sector for the year 2021 (US $ 2.88 per pound) ”.

Based on the foregoing, he maintains that according to the estimates they use and taking the 2016-2019 period as a reference, “this difference would explain an additional amount for the fiscal coffers of US $ 4,160 million.”

From his point of view, although “it must be remembered that according to the fiscal rule this amount will be saved”, the urgencies of the pandemic “will probably increase the pressure to use these resources.” However, he emphasizes that “that an important part of the success of countries rich in natural resources is having a high discipline in the management of abnormal income in periods of good prices. Finding that balance is the result of a good policy that I hope will be achieved ”.

In addition to the implications it has for the treasury, the rise in copper has contributed to the strengthening of the peso against the dollar, as reflected in yesterday’s session, when the US currency closed $ 705.74 seller, which represents a decrease of $ 6.5 in relation to Friday’s close.

On the other hand, Lehmann warns of the favorable consequences that copper can have in terms of investment. “In the last two years, investment in mining was low, but since last year the more favorable prospects have been motivating a change in trend. In fact, mining is certainly going to be the investment leader this year, along with energy and public works, “he said. 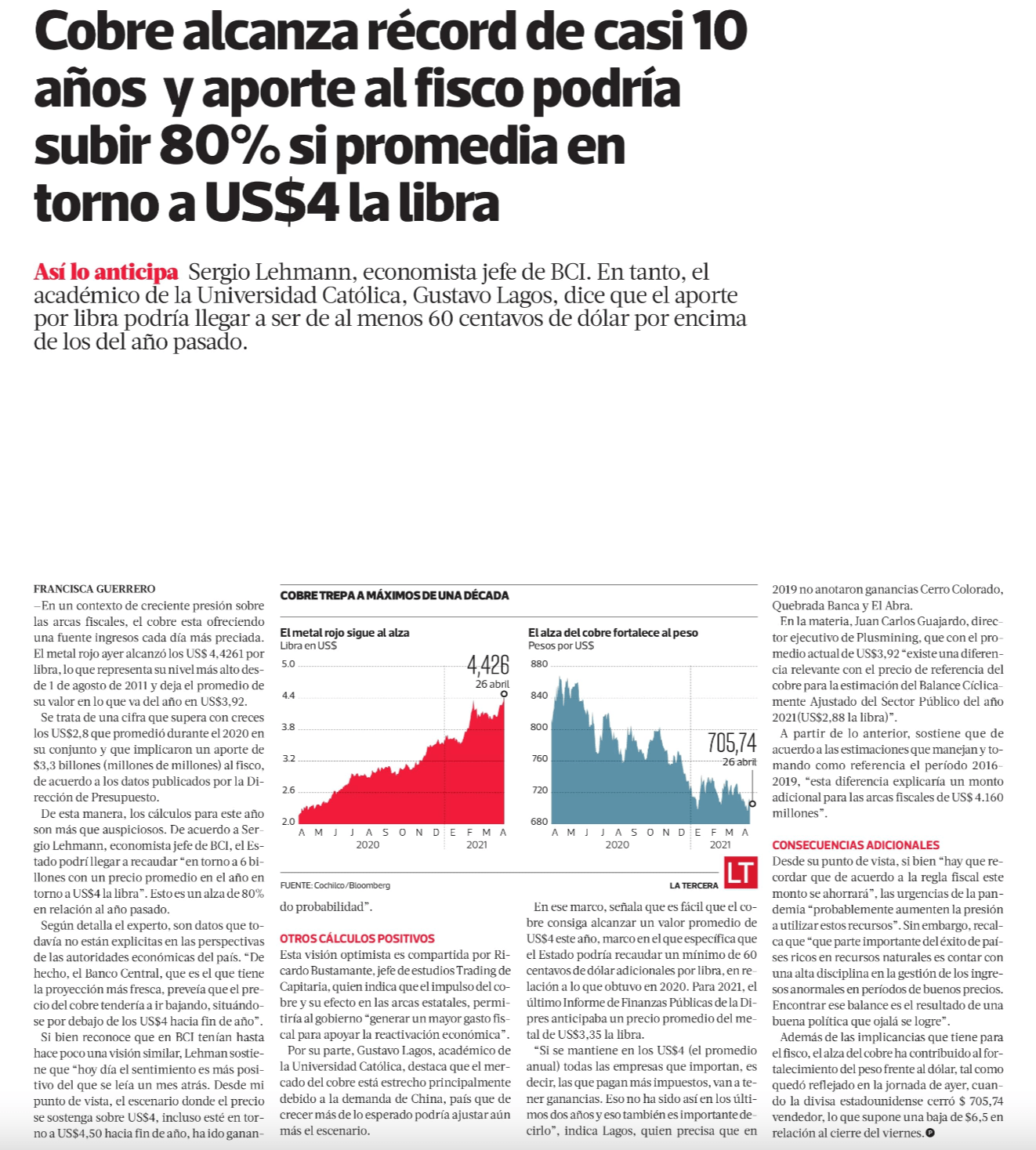