The price of copper reached its historical maximum yesterday, after several days hovering around US $ 4.6. The country’s main export shot up more than 3% to stand at US $ 4.7 per pound, far exceeding the historical record of US $ 4.6 on February 14, 2011.

One of the factors that pushed the metal over the margin was the discussion about the royalty project that took place on Thursday in the Chamber of Deputies, which ended up dispatching the initiative, which had already raised global alerts. During this week. The industry’s concern is that if the initiative is approved as it is, Chile’s copper supply will decrease dramatically in the medium term, a situation that adds to the complex scenario that the sector will face during this decade due to the restricted supply of copper metal.

The president of Sonami, Diego Hernández, said that the increase is strongly linked to the royalty project, and revealed that there are several investment banks that have approached the entity in recent days “because they realized what was happening in Chile”. The union leader added that this is in addition to the elections in Peru, “because they are markets that represent more than 40% of the world’s copper supply. There was no effect on the price of copper a month ago, but in recent days the situation in both countries has influenced anyway,” Hernández commented.

Along these lines, he assured that “the project will favor prices in the next two years and then local operations will have to stop, enough time for country projects to start moving.”

In the effect that the situation in the country is having, agrees the executive director of Plusmining, Juan Carlos Guajardo, who said that “there is no mystery, you have to see what happened at the time of the vote, which after it was approved, began to rise sharply the price of copper. During the last few days, additional factors have been added, because the issue is not only the royalty, since in March production in Chile fell 1.2%, accumulating 10 months of year-on-year contraction, while Peru has not yet fully recovered, and there are rumors of a possible mine closure in Zambia ”.

The expert explained that in any case the level that copper reached yesterday is the highest nominal price in history, however, in real terms, the US $ 4.6 of 2011 is equivalent to a current value of US $ 5, 49.

“Today what is weighing are the supply factors, the royalty situation and the impact on production, which is not something that we are going to see today, but in the medium and long term, with projects that are not going to be carried out and they are going to affect even more the offer, which is already restricted ”, added the director of Studies of Vantaz, Daniela Desormeaux, According to de Cochilco, in Chile there are projects for this decade for US $ 74 billion that are key to maintaining production.

Industry expectations point to the price rising, putting pressure on mining companies to search for deposits in more difficult districts, such as Russia or Africa. “We don’t have many projects ready to start digging. Higher prices will be needed. It will take a copper price to be US $ 15,000 a ton (US $ 6.80 a pound) to encourage a good amount of this more difficult investment, “Glencore CEO Ivan Glasen = berg told the Bloomberg portal. .

Along these lines, Desormeaux announced that the mineral could easily exceed US $ 5, but warned that “you have to be careful, because one thing is the price it can reach, and then if those levels are sustainable over time. Some banks speak of levels above US $ 6, which could make certain substitutes appear and have an impact on demand. ”

From Cochilco, they added that the metal is in a context of restricted supply or deficit perspectives, with copper inventories in metal exchanges that returned to below 400,000 tons this week, which would cover just under a week of global consumption.

“The good performance of China’s crude copper imports, which grew 9.8% during the first four months of this year compared to 2020, and the unemployment figure in the United States —which was higher than expected— lowered expectations. inflation in the short term, enhancing the downward trend of the dollar and inducing the rise in the price of commodities ”vice president of the entity, Marco Riveros.

The Mining Council, meanwhile, highlighted the importance of this variation for tax revenues. “This means a higher collection of economic resources than what had been lobbied for rovalty, and the expected collection will probably double, which is very good news,” explained Joaquín Villarino.

However, the average price of copper so far has reached US $ 3.97, increasing by 33% in this year alone. However, if the lower value of copper is considered at the beginning of the pandemic, in March 2020, the growth is 125%. 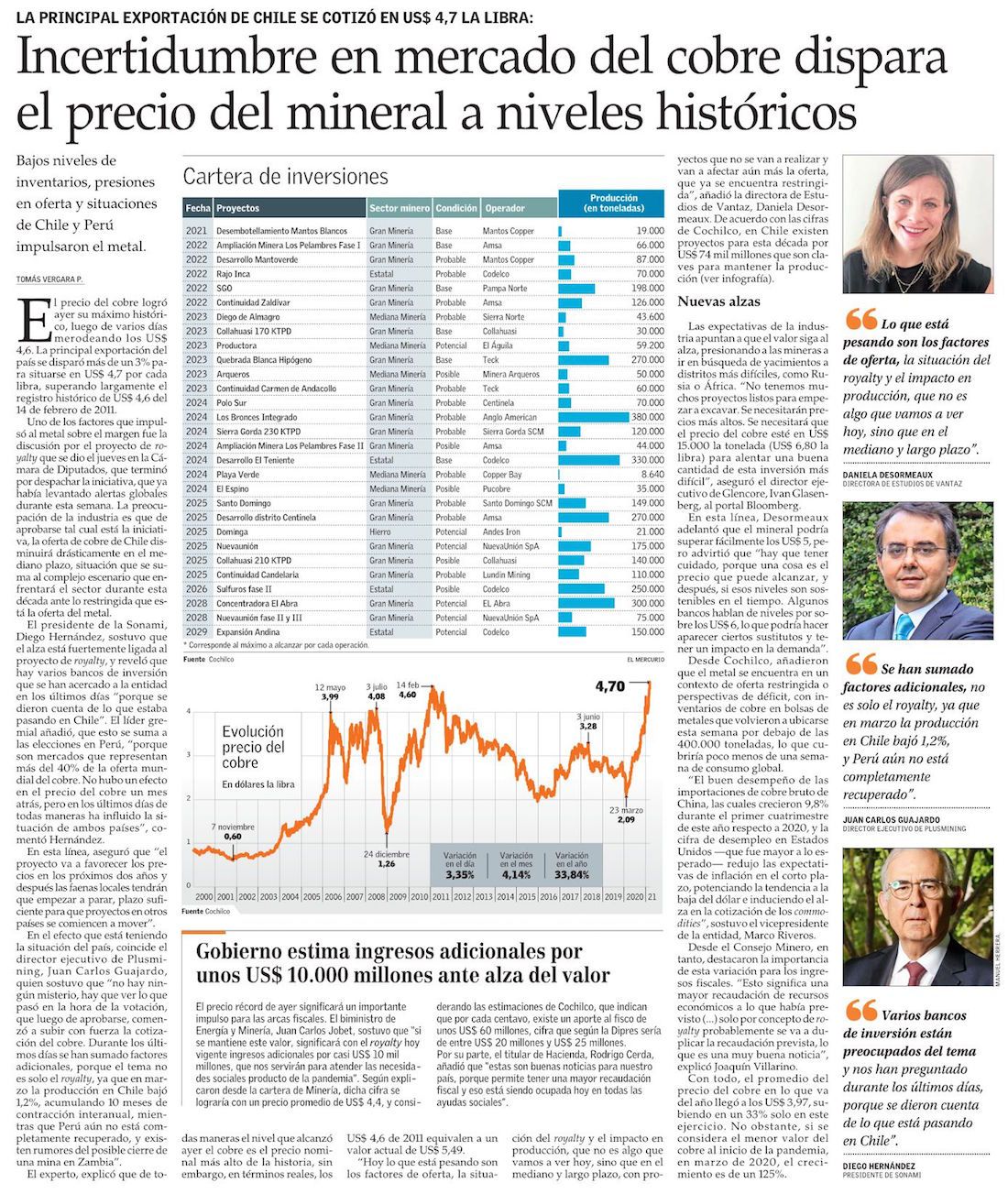