Yesterday it traded at US $ 4.35.
Heavy rains in China are putting pressure on the mineral supply.

The price of copper completed four sessions on the rise, and its highest value in almost two weeks, after trading at US $ 4.35 yesterday, an advance of 1.5% compared to Friday’s trading session. This was, once again, related to what is happening in China.

This time, floods in the center of the Asian giant, especially in the city of Zhengzhou, in Henan province, have raised concerns about the supply and demand for rebuilding damaged infrastructure. In this regard, an operator in Singapore argued that the market was assessing the production disruptions from the floods in Henan and the demand for reconstruction.

“The rains were of a magnitude of once in a millennium. In the market there were two visions, one that pointed out that this would be bad for the price of copper, because it could affect the demand for the products, but the other possibility prevailed, which is that it will affect supply. It should be remembered that China is the third largest producer of copper mine in the world, but it is also the main producer of refined copper, and there the market ended up deciding, ”explained Plusmining’s executive director, Juan Carlos Guajardo.

Meanwhile, Cochilco reported in a report that the announcement of a new auction of strategic reserves in China would take place on July 29, and that it implies a volume below expectations. “It would not have a significant impact on the price,” according to the report. 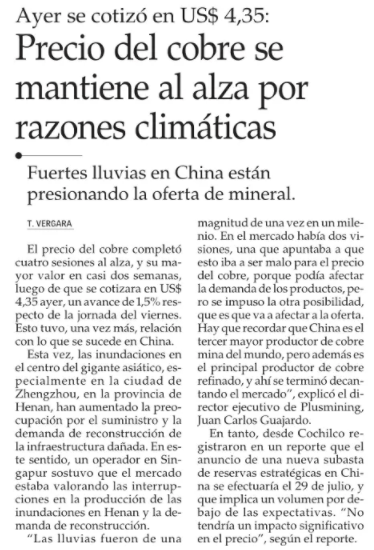