Despite the pressures that exist on the supply of the mineral, with a couple of strikes in Chile and Peru, concern prevails regarding the advance of the global economy.

The price of copper suffered a significant correction on Tuesday after falling 2.1%, reaching US $ 4.15 per pound, which represents its lowest value in almost two months, when the red metal was quoted at $ 4.10 on June 21. Once again, the country’s main export was affected by indicators from China. According to analysts, the growth prospects of the Asian giant are not favorable, so doubts are growing regarding the behavior of demand for the mineral. Added to this are mobility restrictions in the main copper consumer as a result of new outbreaks due to the pandemic, which forced the closure of one of the most important ports in the country.

Another factor is related to a meeting of the representatives of different central banks of the world in which an eventual increase in interest rates should be defined, which would have a very strong impact on the expansion via credit that has been seen in recent months and that it has favored the appreciation of raw materials. Experts point out that the effect of fears associated with a lower demand has prevailed over the impact of possible interruptions in the supply of the mineral, as could have occurred with the negotiation in Minera Escondida, or at times like the current ones, where more than One thousand Codelco workers are on strike in the Andina division.

This is in addition to the paralysis of a union in Caserones and problems with access to one of the largest mining companies in Peru. “This correction is taking place at a time when there are major supply disruptions. The price is defined by many elements, and what is weighing heavily is the macroeconomic outlook, and the supply situation does not have the ability to reverse this outlook ”, explains the executive director of Plusmining, Juan Carlos Guajardo.

All in all, the average price of the metal so far this year is US $ 4.16, but it is noted that this could be the sign of a beginning of a change in trend, producing the expected correction for the second half of the year . The head of analysis of the investment company XTB Latam, José Raúl Godoy, explained that “all this is generating a downward revision in the demand outlook for raw materials in general, and especially for copper, which together Oil is the most widely used commodity in the industry.

Technically we expect copper to continue within its downtrend, with short-term targets of US $ 4.0 – US $ 3.8 per pound ”. 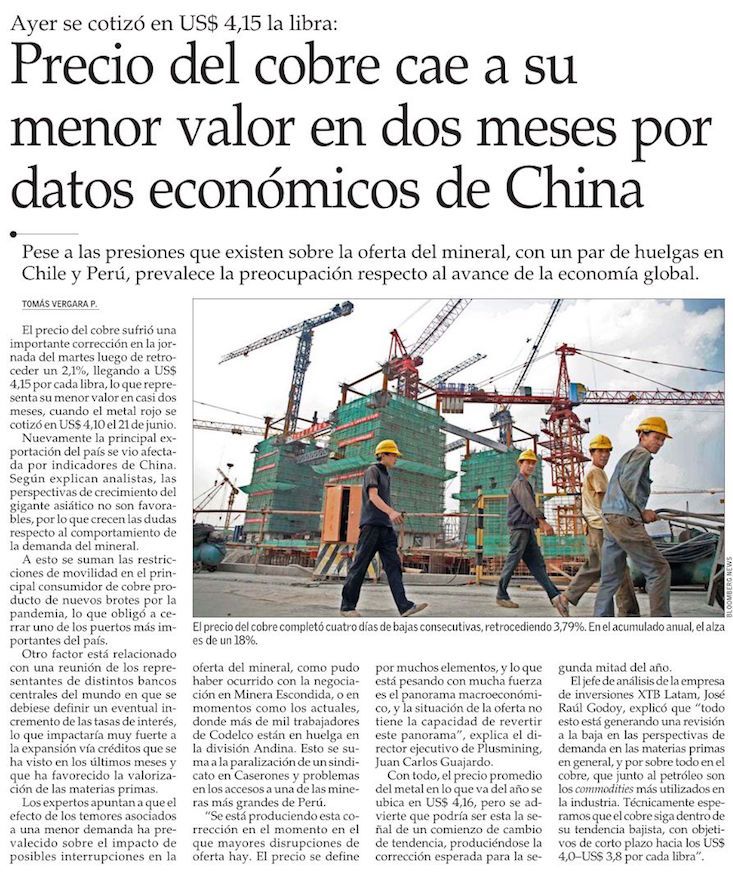