This is the second consecutive month with a positive trend. Meanwhile, the price fell 2.9% during August.

The INE released yesterday the copper production in the country at the end of July, figures that are made with estimates, unlike the work carried out by Cochilco with the information provided by each company, so there are usually small differences. According to this information, copper production grew a slight 0.5% in the country compared to July 2020, reaching 470 thousand tons, versus the 467 thousand tons seen in the seventh month of last year.

In the accumulated annual, the industry is almost 1% below the previous year, and from the market they suggest that the second semester the index could continue to fall, although total production would be very close to sight in 2020.

For example, one of the impacts that could be seen in the second semester has to do with the drought, in which one of the largest operations in the country –Minera Los Pelambres, from AMSA– announced an adjustment in its production guide as a result of the least availability of water. This is in addition to sanitary restrictions at the sites, and there should be some effect on the indicators from the strikes at Caserones and Andina de Codelco.

“Production has stopped falling in the last two months, but I hold a view that production in Chile will not have an expansive performance until next year. Our estimate is a drop this year of 0.7% compared to 2020, which is changing over time ”, explains the executive director of Plusmining, Juan Carlos Guajardo. Regarding the price of the mineral, yesterday it closed at US $ 4.29, with a rise of 1.18%, being the first trading day, after the Fed’s plans were known last Friday. 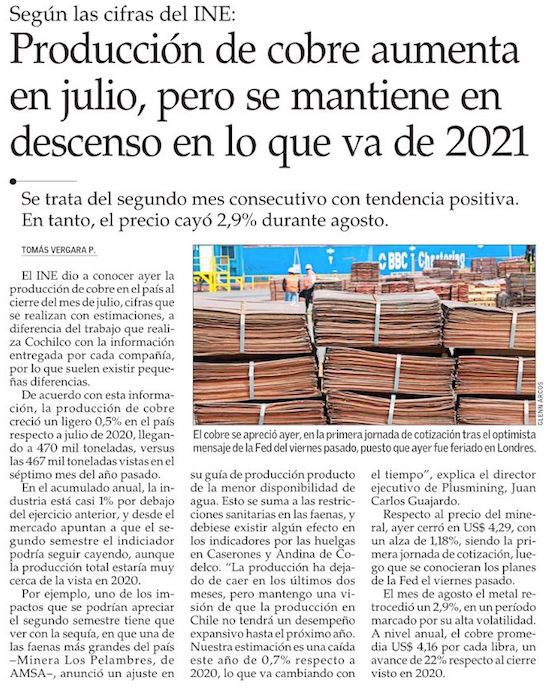