Chinese consumption and the US stimulus plan put pressure on the value of the metal, which has a positive outlook.

Copper, the country’s main shipment, is on track to record the longest rebound in its history. And yesterday it took a new step by trading at $ 3.7 on the London Metal Exchange, its highest level in eight years.

The reasons for this new impulse – after recent slight corrections – are essentially due to the performance of China, the main consumer of the metal, which is currently in the middle of the lunar New Year celebration. However, unlike on other occasions, the holiday has not led to such prolonged arrests, keeping pace with industrial activity.

“The lunar New Year and travel permits are being more restrictive due to fears of new outbreaks, therefore, instead of having the traditional stop that is seen at this time of year, factories have continued to produce at normal rates, This has caused copper inventories to fall sharply, supporting optimism among investors, ”explains Plusmining’s executive director, Juan Carlos Guajardo.

The metal considered a barometer of the world economy has also benefited because the government of the Asian giant has been lowering short-term interest rates, which would confirm that the Chinese government’s monetary policy will be reasonable, with good prospects that there will be a solid demand for the mineral.

The director of studies at Vantaz Group, Daniela Desormeaux, also pointed to the impact of the global depreciation of the dollar, after the stimulus plan announced by the United States government, which would also favor the mineral used from electronic products and pipes to electronic vehicles, among others. “The stimulus package of the United States to face the economic crisis has caused a weakening of the dollar, which favors imports and, therefore, makes raw materials more attractive, raising their price. This is reflected in the future prices of copper, and also other commodities, such as gold, which are seeing the same trend ”, assured Desormeaux.

All in all, the variation in the working day led to the annual value of US $ 3.6, 8.0% more than what the Government has planned according to the latest Public Finance Report (IFP) prepared by the Dipres, in which an average annual price of US $ 3.34 was forecast, which contributes to strengthening the slumping fiscal coffers. For every penny of the increase in the mineral above the average price, the treasury receives income of the order of US $ 22 million. Now, compared to the projection of US $ 2.88 included in the 2021 Budget, the accumulated price variation so far this year is 25% higher.

Although this is the highest value of copper in eight years, expectations for the future of the mineral are more than positive and further increases are expected after ten consecutive months of advances according to data from Bloomberg. An eleventh month increase would mark the longest monthly rally on the London Metal Exchange, when the mineral began trading in its current form in 1986.

The head of analysis of XTB Latam, José Raúl Godoy, explained that the current streak should be extended at least for the duration of the economic recovery, that is, probably during 2021 and 2022.

“China has been the first country to recover from the health crisis, but it will not be the only one. Lately we have seen how the virus begins to regress and mass vaccination to accelerate. This is generating very good growth projections, not only in China, but also globally, which is directly impacting industrial raw materials, among which copper and oil stand out, ”said Godoy, who expects peaks during the year above US $ 4 and an average of around US $ 3.8.

Juan Carlos Guajardo coincides in the forecast of at least two positive years, “with a strong demand for copper, based on a recovery in the markets and the supply that continues to be affected by the pandemic.” 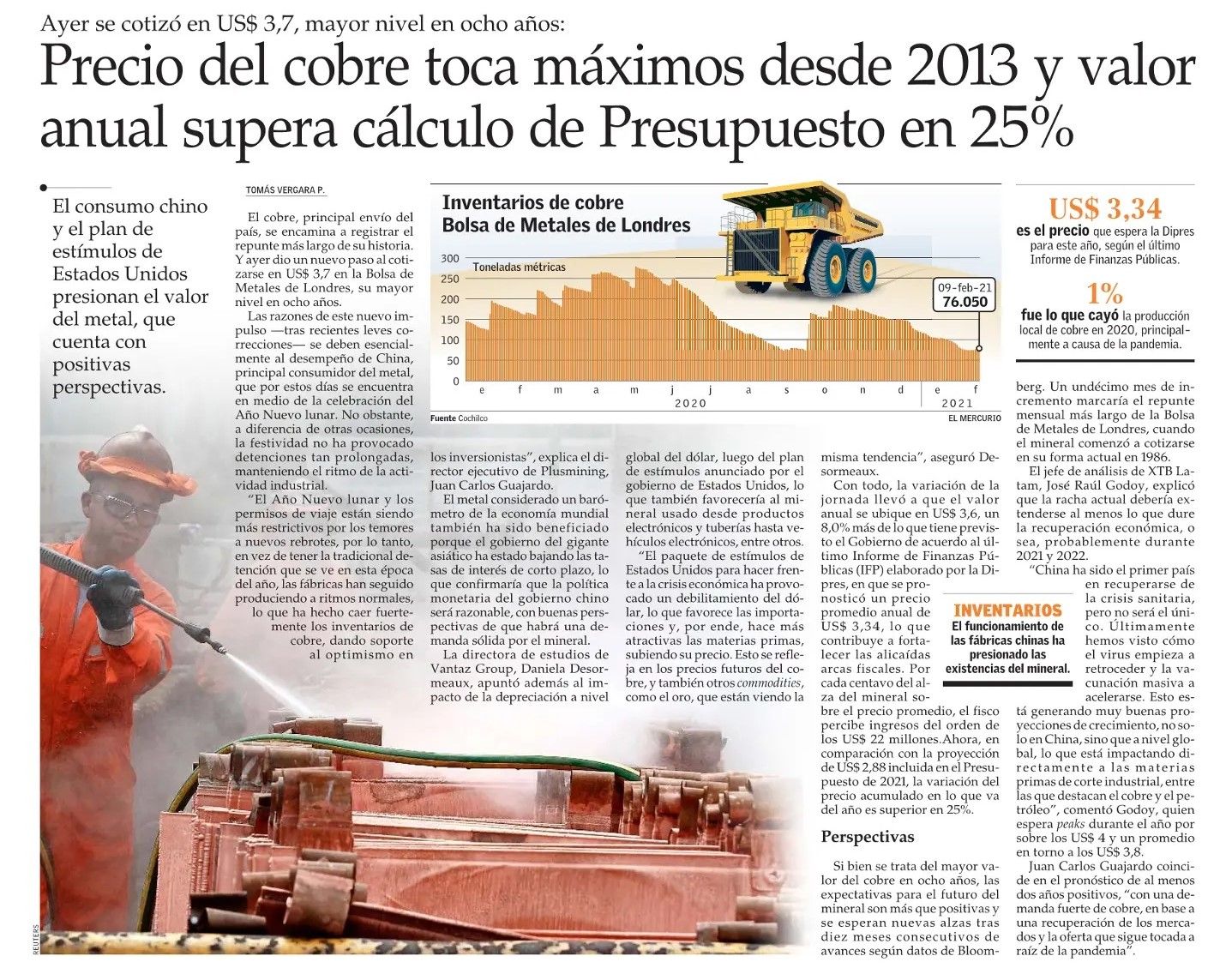