Only one out of every four tons of copper exported corresponds to cathodes, while copper concentrate, which requires less added value, represents 75%. Experts point out that behind this there are geological reasons and, by the way, also business reasons.

Chile is by far the largest copper producer in the world, a difference that increased in the pandemic, after its predecessor, Peru, suffered a sharp decline in production due to the pandemic. But Chile, in recent years, rather than exporting metal plates, known as cathodes, what it has done is to send metal concentrate, a kind of sand with about 30% copper, which must be subjected to smelting processes and refining to become high purity cathodes. The rest of the work must be done in facilities in other countries, mainly China, which is also the main buyer of the Chilean metal.

In 2020, according to information revealed by the Chilean Copper Commission (Cochilco), the share of concentrates in total Chilean copper production rose to 74% of the total, which represents its highest historical figure. Only 25.6% of the production, on the other hand, corresponded to cathodes. As an example, in 2011 Chile exported 38% of its copper in the form of cathodes.

The situation has a geological explanation: “This is the result of the depletion of oxidized copper resources that are processed through leaching. This is a geological issue and reversing that is beyond the possibilities in the short term at least ”, assures Juan Carlos Guajardo, executive director of Plusmining.

“The decrease in cathode production is explained, in part, by a growing depletion of oxidized minerals, which is a natural geological trend. On the other hand, our smelting capacity has remained unchanged in the last 30 years, which means that if we produce more concentrates, the capacity to treat them in Chile is the same. Therefore, they are exported as concentrates, altering the mineral export matrix. A few years ago it was less than 70% and today close to 75% ”, complements the director of Studies and Public Policies of Cochilco, Jorge Cantallopts.

The issue, the lack of smelting capacity in the national territory, has been the subject of long analysis within the national mining industry, with various edges. One of them is environmental, considering the effect that the emissions resulting from the smelting and refining process have on the environment. As a result, in 2013 Supreme Decree 28 (DS 28) was issued, which forced the companies that own smelters to invest in technology that allows capturing 95% of polluting emissions. And although the former Minister of Mining, Baldo Prokurica, pushed to postpone the entry into force of this rule, to go further and capture around 98% of emissions, this ultimately did not prosper.

Result? Today only two private smelters remain operational: Chagres and Altonorte, all the others being from Codelco. Even those of the state mining company do not generate a profitability that justifies their continuity. The state company has even announced that it is analyzing future options, especially with the one that generates the most losses: Windows, in Region V.

“Another thing is that, assuming that we have a significant endowment of mining resources that reach concentration, we plan the technological development that allows reducing the transformation costs and is a source of value creation. However, with the existing technologies in Chile and the associated costs, in many cases going from concentrate to cathode is a loss of value ”, concludes Cantallops.

“Regarding the added value issue, I think the correct thing to do is to understand this aspect from an economic perspective, that is, in which production stage the greatest value is generated and in this case the production of concentrate is far superior to that of electro-refined cathodes. A different question is whether one wants to evaluate whether or not it is convenient to have foundries for other aspects such as regulatory or market aspects, in which there is an open debate that has not been able to be resolved ”, adds Guajardo. 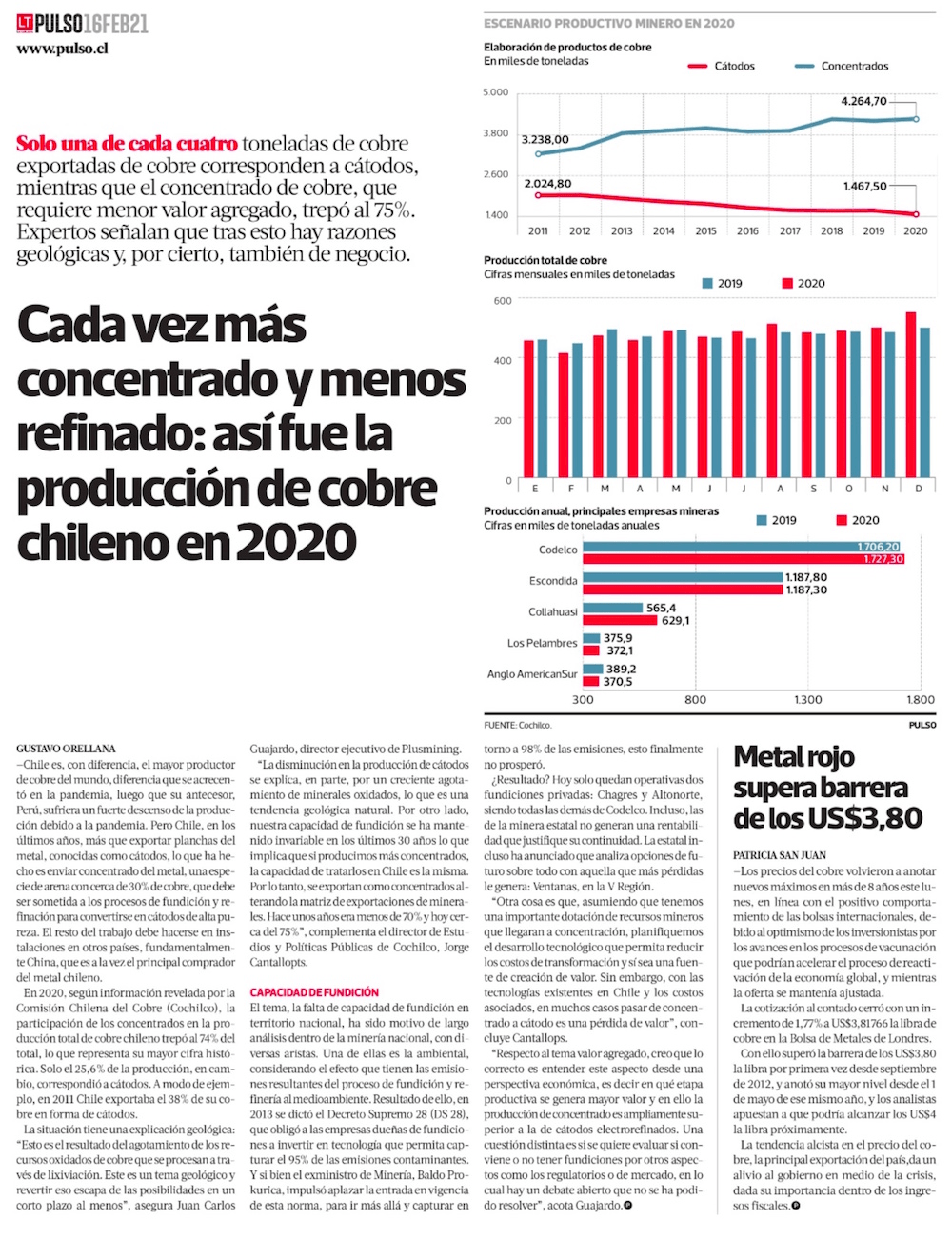