The company will emphasize supply.

The company eliminated the vice-presidency of Productivity and Costs, which was reduced to a management, and created that of Supply.

While copper remains unstoppable and is already only one tris away from achieving US $ 4 a pound in its listing on the London Stock Exchange – although future prices have already exceeded that barrier in Chile, the main copper company, the state-owned Codelco announced yesterday several changes in its organizational line, among them the disappearance of the Vice Presidency of Productivity and Costs, which for several years was the workhorse of the former executive president, Nelson Pizarro, to keep at bay the increases in production costs generated in the previous boom in prices of the metal.

“This change is part of a complete review of its strategy,” says Juan Carlos Guajardo, executive director of the consulting firm Plusmining. “The administration’s priorities now are different, focusing on strengthening the supply chain, with the creation of a specific vice-presidency for this,” he describes.

Along with eliminating the vice-presidency of Productivity and Costs, the mining company said yesterday that it had created that of Supply, which from April will be in charge of Mauricio Acuña, an executive who raised Cencosud.

From Codelco they explained this morning that the area that Acuña will lead will be in charge of exploiting synergies in the purchases of all divisions, which until now work quite separately, which in the process will also contribute to lower costs, since the divisions individually access different values in the purchase of its inputs, influencing aspects such as the size of each one of them.

“This work must be reflected in an important value capture, which affects the reduction of costs, to fulfill the corporate promise of reaching the second quartile of costs (50% of the most efficient companies) in the mining industry”, said the company when consulted.

As Guajardo recalls, the current Codelco board of directors, chaired by Juan Benavides, committed a few days ago to generate additional surpluses of US $ 1,600 million compared to 2018 (US $ 2,002 million), which implies that by 2024 they seek to reach US $ 3,600 million, “And these decisions are aligned to reach that goal,” says the expert.

The former executive president of Codelco, Marcos Lima, says that keeping costs down does not necessarily imply that there has to be a specific structure for it. “When I was at Codelco (1996 to 2000) we didn’t have it and despite this we managed to reduce costs by 30%,” he says. “The main thing is that the areas of operations are aware that they are the main actors in reducing costs and that each one is able to prevent them from rising,” explains Lima.

The UC academic, Gustavo Lagos, agrees: “Codelco has done the cost containment work quite well, both in total and in operations, reducing considerably. They can continue to contain them without any vice presidency. In addition, it seems reasonable to me that the company is restructured from time to time, according to the needs that arise ”.

He also remembers that that vice presidency has not been predominant in the last year. In fact, after José Robles’ resignation from that position last October, he was only temporarily replaced by the vice president of finance, Alejandro Rivera.

In any case, from Codelco they explained that the area of ​​productivity and costs will continue in force under the created corporate management of Operational Excellence, whose dependence is under the vice-presidency of South Central Operations, in the hands of Mauricio Barraza.

“After six years since its creation in 2015, the Operational Excellence area is mature and will now be deployed with a reinforced team to accelerate C + (Lean system) implementations this year and ensure its sustainability to enable the tools and practices of this system. , which supports people to maximize the capture of value in excellence in operations, where the potential of 90% of the committed surpluses for 2021 is housed, ”they described from Codelco.

The company also specified that its focus is on containing the growth of debt (today around US $ 16,000 million) and strengthening the financial position to ensure the investment plan.

The price of copper continues to rise. On the London Metal Exchange, the price of the red metal rose 1.81% reaching a value per pound of US $ 3.99, the highest value since September 2011.

Meanwhile, shortly before noon, copper futures rose over 3%, pushing prices to over US $ 4 a pound.

The greater flow of currencies as a result of the rise in the metal continues to play against the exchange rate. The dollar registered its eighth consecutive decline today. During this morning, the spot price of the US currency fell 0.89% and was trading at $ 705, its lowest value since the first week of January, when it fell below $ 700. In twelve months, in February 2020 the greenback was quoted around $ 800, accumulating a decrease of more than 11%. 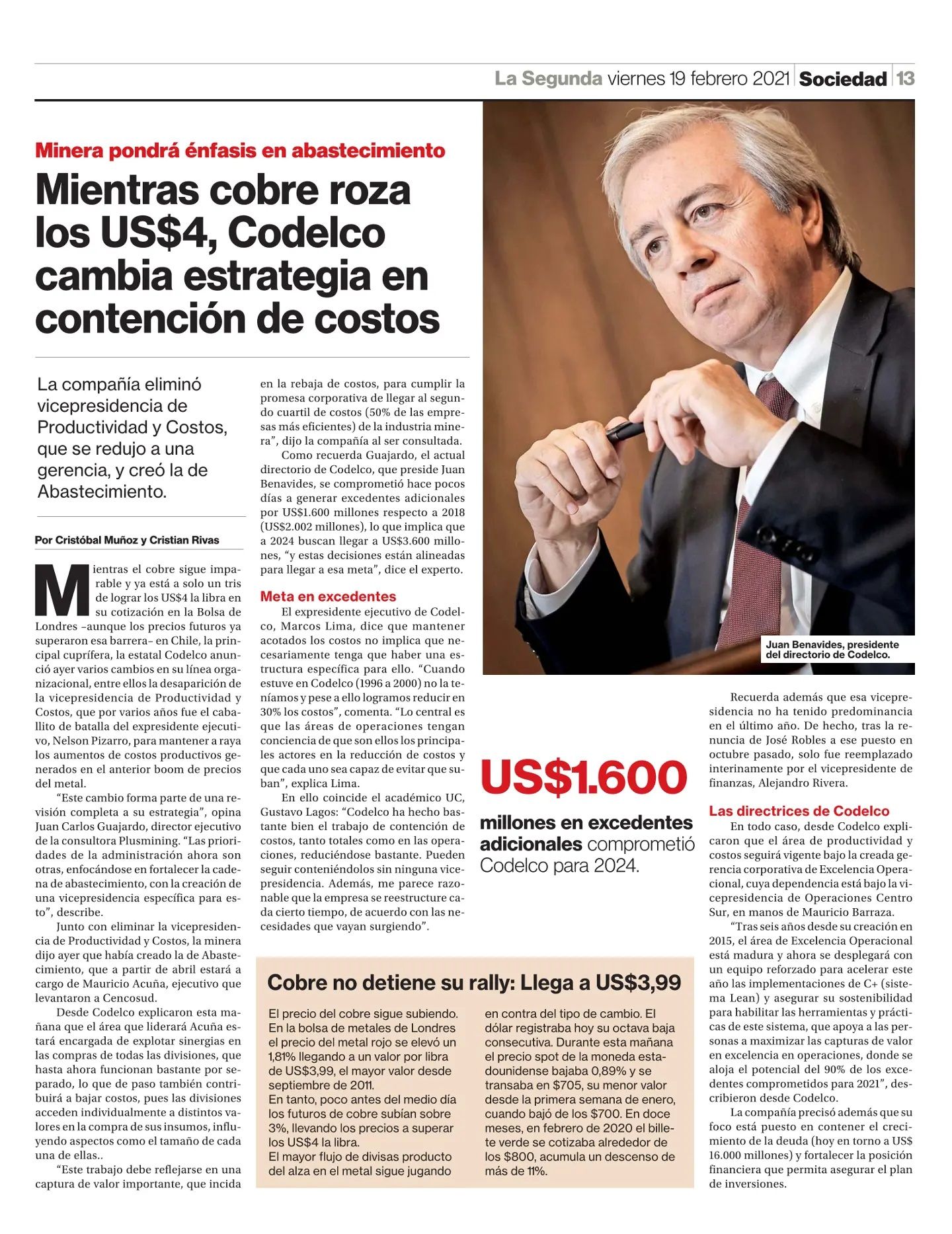