Home » La Segunda » Small-scale mining and exploration, the first items to receive a boost from the bullish streak of copper
La Segunda

The big projects that could take advantage of the bonanza. Large and medium-sized mining is not accelerating and still sees this period in moderation.

Good news from the London Metal Exchange. The price of copper reached US $ 4,113 a pound, after rising 3% compared to Friday. According to the Chilean Copper Commission (Cochilco), it is the highest price for the red metal since September 1, 2011. The rally is cause for celebration not only among the private ones that obtain the highest profits. According to the president of Sonami, Diego Hernández, “for every average annual cent of the dollar that the price of copper increases, Chile increases its income by US $ 125 million from exports and the treasury by US $ 60 million from Codelco surpluses and taxation. of private mining ”.

The executive president of the Mining Council, Joaquín Villarino, maintains that “the country’s large mining industry is taking advantage of current copper prices with production practically at pre-pandemic levels, thanks to the tremendous effort made during 2020 to continue operating, not Despite the restrictions imposed by the pandemic ”. Although this does not mean that the large mining companies change their exploitation plans for the moment. In BHP they commented that their plans are long-term, therefore they are not modified by a specific market circumstance, such as the possibility of exploiting sectors with higher mineral grade.

Those that do change are other mining sectors, such as small companies and suppliers, as they have more flexibility to quickly adapt to this better scenario. William Díaz, former executive vice president of Enami in the period of the super cycle explains that at these junctures, the smallest reactivate their operations quickly, the same happens with exploration projects, impacting suppliers and jobs. “For example, drillings are activated and prices are the same. In a normal period, a borehole can cost US $ 10 per meter and in a good period it could reach US $ 100. There is also a labor phenomenon, where a lot of labor leaves agriculture ”, he maintains.

The projects to come

But there are new initiatives that could take advantage of this bonanza. According to the Director of Studies and Public Policies of Cochilco, Jorge Cantallopts, projects such as “Unbottling of Mantos Blancos Concentrator, Mantos Copper (US $ 219 million), Mine-Plant Transfer of Codelco Division Andina are currently in the process of starting operations (US $ 1,480 million) that just because they are scheduled for this year, they could see an advantage of this price hike ”.

The expert adds that later projects are observed that are scheduled for 2022 or 2023 that could seek options to advance their schedules and try to take advantage of the current scenario, such as the marginal expansion Los Pelambres Phase I or the INCO project (US $ 1.3 billion), Spence BHP’s Growth Option (US $ 3,260 million), Mantos Copper’s Mantoverde Development (US $ 847 million), Minera Sierra Norte’s Diego de Almagro medium mining project (US $ 597 million) or Teck’s QB2 (US $ 4,739 million) ).

But that is not all. The mining sector also has projects seeking environmental permits. Of course, these could see the light on a longer horizon. The Minister of Mining, Juan Carlos Jobet, comments that as of January 15 new projects were raised for more than US $ 19 billion, which must be submitted for environmental evaluation: “They are extensions of works, investment in infrastructure and other greenfields.”

Of these, the two main ones are the “Infrastructure Development and Improvement of Productive Capacity of Collahuasi”, which involves an investment of US $ 3,200 million and Los Bronces Integrado, of Anglo American, for US $ 3,000 million.

According to specialists, the rise in prices should be taken with caution, given how complex it is to launch large initiatives.

“Intuition would indicate that these high prices could immediately generate a wave of investment, but mining does not work in such an automatic way. In that sense, if one looks at the portfolio of projects, most are expansions or brownfields projects, which, in a certain way, are easier to carry than new projects or greenfields. Chile has few new large-scale projects ”, comments Plusmining’s executive director, Juan Carlos Guajardo.

In the same vein, the professor of Mining Engineering at UC Gustavo Lagos says that the reactivations of initiatives suspended during the pandemic could only be seen in a period of two years.

“This is going to happen anyway, because the price is going to stay for at least two years, so there will be loans, shares will rise, investors will be more willing to inject resources. We will see an increase in copper production, in which small companies that had closed and some expensive operations that were not profitable with low prices, will produce again ”, comments the academic. 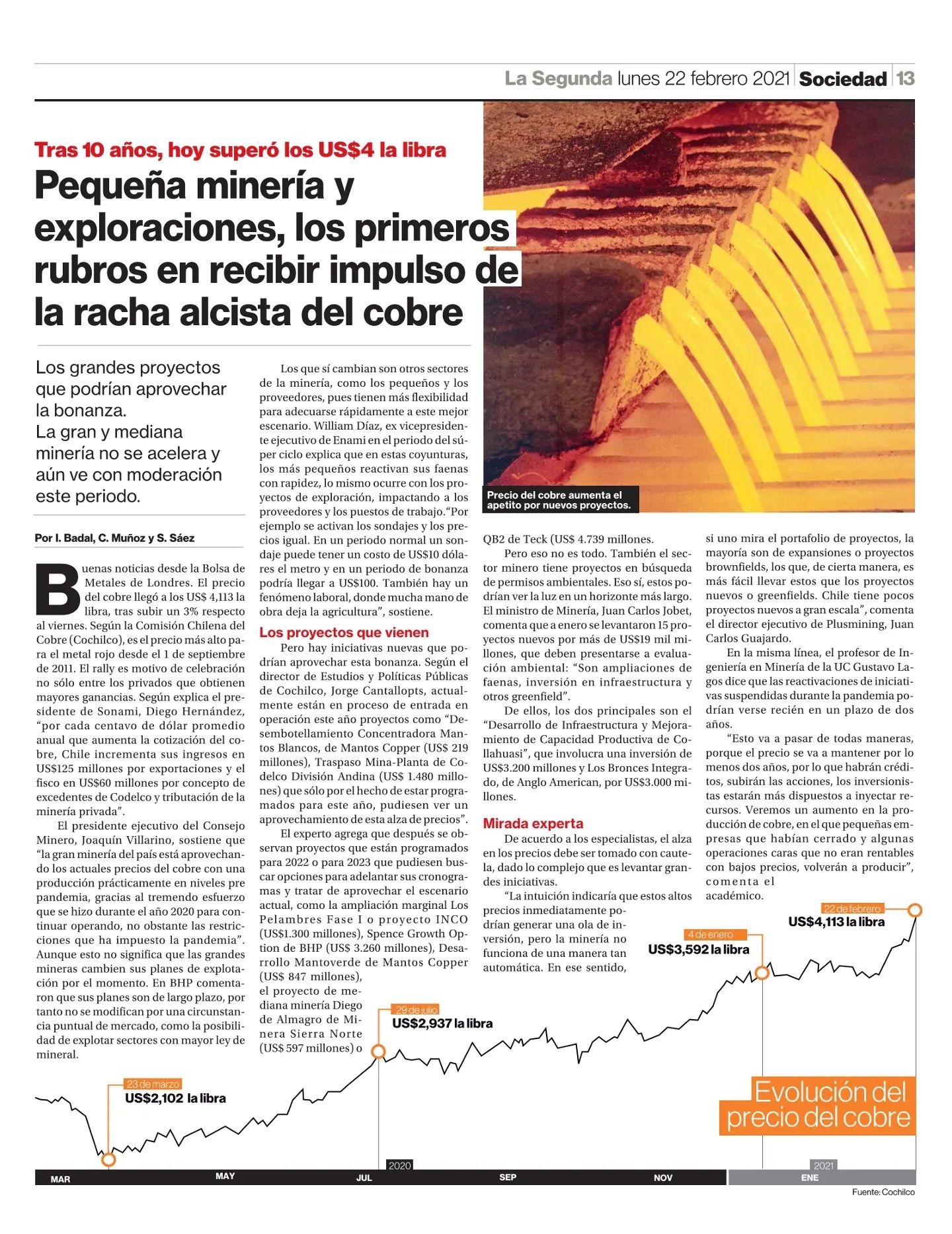