Although experts agree that there are several factors that influence, we are also beginning to see an increase in concern about what happens in the negotiation.

The collective bargaining process that takes place in Minera Escondida is closely followed by the world copper market, mainly due to the effects that an eventual strike could have, after the union at the site called to reject the company’s offer. which considered benefits of $ 18 million.

Yesterday, the country’s main export reached US $ 4.44 after closing the day with a rise of 0.87%, which took the metal to its highest value in six weeks, and the annual average to US $ 4.15 , totaling an annual growth of 26%.

However, experts agree that an eventual shutdown of the world’s largest copper miner is already on the table. This, for example, has been reflected in an increase in questions received by consulting firms operating in Chile.

“Clearly, the union’s reaction has sparked interest and the focus is being placed on the outcome of the negotiation, and the concern is that there is a precedent for a long strike. Faced with an eventual strike, going out to buy copper is not so simple, the market is tight, it is not as critical as at the beginning of the year, but it is not in a slack situation ”, explains the director of Plusmining, Juan Carlos Guajardo.

For her part, the director of studies at Vantaz, Daniela Desormeaux, warned that in any case there are several factors that affect the price of the mineral, “obviously a possible strike can have an impact on the level of copper prices, if we see what which occurred in 2017 with an extended strike, there was an increase in response to this situation, because Escondida contributes between 5% and 6% of world copper production, although it is something specific in the spot market, and not future prices ”. The expert added that due to the size of the task, it always attracts attention, because it sets a precedent for the industry.

Regarding the market situation, the executive vice president of Cochilco, Marco Riveros, explains that currently copper inventories on the metal stock market are below the average for the period 1995-2021, so there is greater pressure in this regard.

“On the other hand, expectations for this year indicate that there would be a metal deficit for an approximate volume of 160 thousand tons. This, due to expectations of recovery of the lost demand in 2020 in the United States and Europe, countries that would register a strong recovery ”, says Riveros.

However, it is not the only process underway. Last night the voting in the Andean division of Codelco ended, with two unions that would choose to reject the company’s latest offer, the same thing that would happen today in Caserones, so the market could face on Monday with three strikes voted. 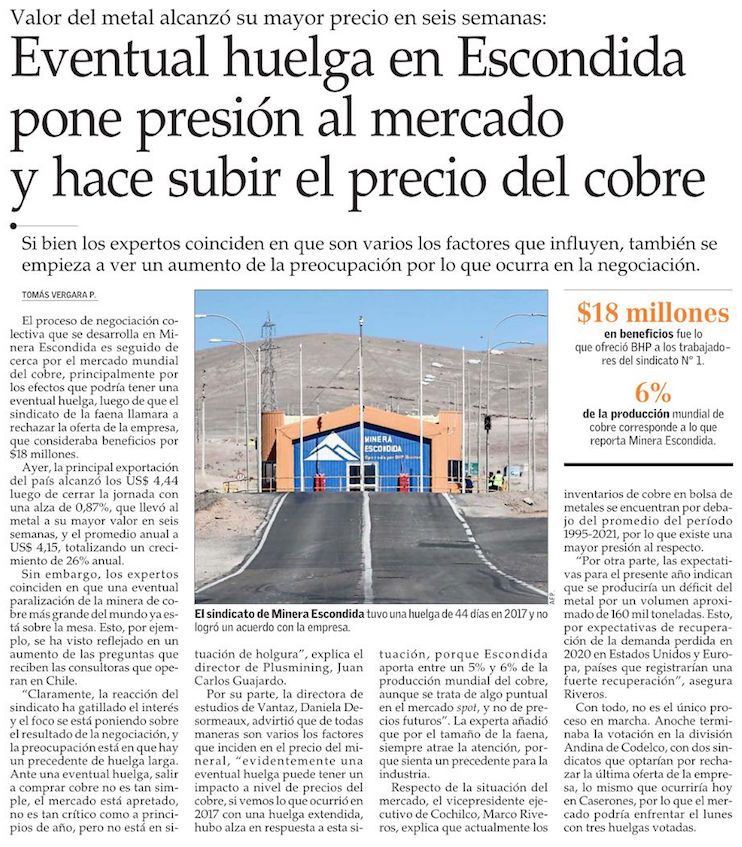